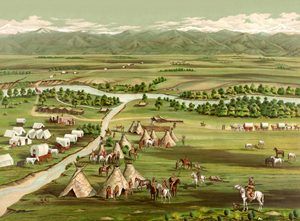 The Bummers Gang operating in Auraria (now west Denver), Colorado beginning to “raid” the town in the mid-1850s.

Unlike other gangs of the wild west who were robbing banks, trains, and killing folks, this gang was a group of loafers and idlers who were guilty of a number of petty and minor crimes, hence the name “Bummers.” Born of the gold rush in the nearby mountains, Denver had become a city bustling with boozers and losers and petty thieving had become a nightly occurrence. Clothes-lines were missing their linen, while farmer’s wagons and market places were constantly relieved of their game and provisions. On January 30, 1860, the order-loving citizens had finally had enough after a countryman’s wagon was robbed of a large number of turkeys. Suspicions were immediately fastened upon the squad of hard characters who proudly called themselves as the “Bummers.” This sparked what would become known as the “Turkey War.” 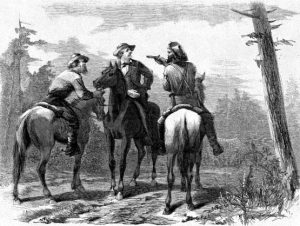 A citizens committee determined that the guilty parties were Thomas Clemo, William Todd, alias Chuck-a-luck, William Harvey, and William Karl, alias Buckskin Bill. The Bummers, determined to fight back, marshaled their forces and began to parade the streets with guns and pistols in readiness for bloodthirsty work. In the evening, they began to halt peaceable citizens, threatening them with weapons, made talk of burning the town, and fired upon two of the witnesses who had pinpointed the thieves, though neither was hurt.

A military company formed earlier in the month was called upon to guard the city during the night, preventing the Bummers from carrying out their threats. Another meeting was held by the citizens where a resolution was passed that several members of the Bummers Gang must leave the city, under threat of hanging. Those pinpointed all headed for parts unknown and the famous “Turkey War” ended.