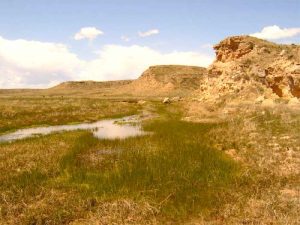 The Arikaree River, a tributary of the North Fork of the Republican River, is a 156-mile-long long waterway in the central Great Plains.

It flows east out of Yuma County, Colorado through the extreme northwestern corner of Kansas through Cheyenne County for about 10 miles, before making its way through the southwestern portion of Nebraska to its mouth near the town of Haigler where it joins the North Fork of the Republican River. It is named for the Arikara Indian tribe.

The Battle of Beecher’s Island, sometimes called the Battle of Arickaree, was fought on a small island in the middle of the Arickaree River in what is now the state of Colorado, near the west line of Cheyenne County, Kansas. This action terminated the Indian wars on the plains.

In Colorado, an area is designated within the Colorado Natural Areas Program to protect native and uncommon species that may be endangered or threatened. Here can be found several species of reptiles, fish, and amphibians that are native and uncommon. The area is a sanctuary for many bird species, including burrowing owls, ferruginous hawks, and greater prairie chickens. The habitat is near-pristine and there are also high-quality riparian and native prairie plants. 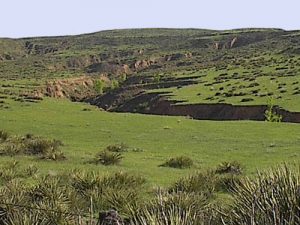 However, this river along with others in the Great Plains are shrinking due to the amount of water utilized on farms.