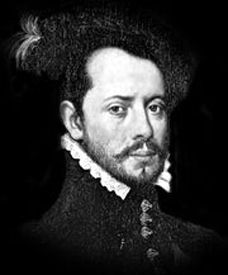 A Spanish explorer and mapmaker, Captain Alonso Alvarez de Pineda and his crew were probably the first Europeans in Texas, claiming it for Spain. Little is known of Pineda’s early life, but, in 1517, he was sailing for the Spanish Governor of Jamaica, Francisco de Garay. The Spanish thought there must be a sea lane from the Gulf of Mexico to Asia and In 1517 and 1519, Pineda led several expeditions to map the western coastlines of the Gulf of Mexico, from the Yucatan Peninsula to Panuco River, just north of Veracruz, Mexico.

On June 2, 1519, Alvarez de Pineda entered a large bay with a sizable Native American settlement on one shore. He sailed upriver for 18 miles and observed as many as 40 villages on the banks of the large, deep river he named “Espíritu Santo.” It has been long assumed that he was the first European to report of the mouth of the Mississippi River. Pineda continued his journey westward and one of the regions he explored and mapped was the area around Corpus Christi Bay, entering the bay on the feast day of Corpus Christi, hence the name.

Shortly thereafter, he sailed up a river he named Las Palmas, where he spent over 40 days repairing his ships. The Las Palmas was most likely the Rio Grande. The expedition established the remainder of the boundaries of the Gulf of Mexico while disproving the idea of a sea passage to Asia. It also verified that Florida was a peninsula instead of an island, and allowed Alvarez de Pineda to be the first European to see the coastal areas of western Florida, Alabama, Mississippi, Louisiana, and Texas, lands he called “Amichel.” His map is the first known document of Texas history and was the first map of the Gulf Coast region of the United States. The next year, he was killed in a fight with Huastec Indians in Panuco, Mexico.