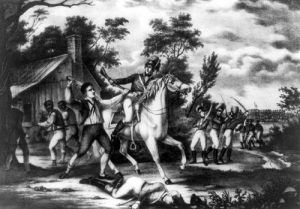 “In a thinly settled part of Virginia, the quiet of the Sabbath eve was once broken by the loud, hurried roll of the drum. Volunteers were invoked to go forth and prevent the British troops, under the pitiless Tarleton, from forcing their way through an important mountain pass. In an old fort resided a family, all of whose elder sons were absent with our army, which at the north opposed the foe. The father lay enfeebled and sick. By his bedside the mother called their three sons, of the ages of thirteen, fifteen, and seventeen.

“Go forth, children,” said she, “to the defense of your native clime. Go, each and all of you; I spare not my youngest, my fair-haired boy, the light of my declining years.

“Go forth, my sons! Repel the foot of the invader, or see my face no more.”

In order to get a proper estimate of the greatness of the part which woman has acted in the mighty onward-moving drama of civilization on this continent, we must remember too her peculiar physical constitution. Her highly strung nervous organization and her softness of fiber make labor more severe and suffering keener. It is an instinct with her to tremble at danger; her training from girlhood unfits her to cope with the difficulties of outdoor life. “Men,” says the poet, “must work, and women must weep.” But the pioneer women must both work and weep. The toils and hardships of frontier life write early wrinkles upon her brow and bow her delicate frame with care. We do not expect to subject our little ones to the toils or dangers that belong to adults. Labor is pain to the soft fibers and unknit limbs of childhood, and to the impressible minds of the young, danger conveys a thousand fears not felt by the firmer natures of older persons. Hence it is that all mankind admire youthful heroism. The story of Casabianca on the deck of the burning ship, or of the little wounded drummer, borne on the shoulders of a musketeer and still beating the “rappel” — while the bullets are flying around him– thrill the heart of man because these were great and heroic deeds performed by striplings. It is the bravery and firmness of the weak that challenges the highest admiration. This is woman’s case: and when we see her matching her strength and courage against those of man in the same cause, with equal results, what can we do but applaud?

A European traveler lately visited the Territory of Montana–abandoning the beaten trail, in company only with an Indian guide, for he was a bold and fearless explorer. He struck across the mountains, traveling for two days without seeing the sign of a human being. Just at dusk, on the evening of the second day, he drew rein on the summit of one of those lofty hills which form the spurs of the Rocky Mountains. The solitude was awful. As far as the eye could see stretched an unbroken succession of mountain peaks, bare of forest–a wilderness of rocks with stunted trees at their base, and deep ravines where no streams were running. In all this desolate scene there was no sign of a living thing. While they were tethering their horses and preparing for the night, the sharp eyes of the Indian guide caught sight of a gleam of light at the bottom of a deep gorge beneath them.

Descending the declivity, they reached a cabin rudely built of dead wood, which seemed to have been brought down by the spring rains from the hillsides to the west. Knocking at the door, it was opened by a woman, holding in her arms a child of six months. The woman appeared to be fifty years of age, but she was in reality only thirty. Casting a searching look upon the traveler and his companion, she asked them to enter.

The cabin was divided into two apartments, a kitchen, which also served for a store-room, dining-room, and sitting-room; the other was the chamber, or rather bunk-room, where the family slept. Five children came tumbling out from this latter apartment as the traveler entered, and greeted him with a stare of childlike curiosity.

The woman asked them to be seated on blocks of wood, which served for chairs, and soon threw off her reserve and told them her story, while they awaited the return of her husband from the nearest village, some thirty miles distant, whither he had gone the day before to dispose of the gold dust which he had “panned out” from a gulch nearby. 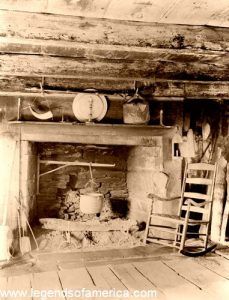 He was a miner. Four years before he had come with his family from the East, and pushing on in advance of the main movement of emigration in the territory, had discovered a rich gold placer in this lonely gorge.

While he had been working in this placer, his wife had with her own hands turned up the soil in the valley below and raised all the corn and potatoes required for the support of the family; she had done the housework, and had made all the clothes for the family.

Once, when her husband was sick, she had ridden thirty miles for medicine. It was a dreary ride, she said, for the road, or rather trail, was very rough, and her husband was in a burning fever. She left him in charge of her oldest child, a girl of eleven years, but she was a bright, helpful little creature, able to wait upon the sick man and feed the other children during the two days’ absence of her mother.

Next summer they were to build a house lower down the valley and would be joined by three other families of their kindred from the East. “Have you never been attacked by the Indians?” inquired the traveler.

“Only three times,” she replied. “Once three prowling red-skins came to the door, in the night, and asked for food. My husband handed them a loaf of bread through the window, but they refused to go away and lurked in the bushes all night; they were stragglers from a war-party, and wanted more scalps. I saw them in the moonlight, armed with rifles and tomahawks, and frightfully painted. They kindled a fire a hundred yards below our cabin and stayed there all night, as if they were watching for us to come out, but early in the morning they disappeared, and we saw them no more.