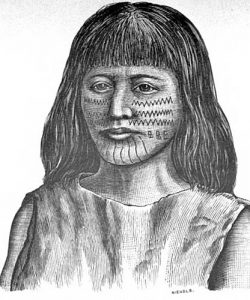 The Wailaki people were an Athapascan tribe or group of many villages formerly located on the main Eel River and its north fork from Kekawaka Creek to within a few miles of Round Valley, California. After some fighting with the whites, they were placed on the Round Valley Reservation, where some of them still reside. Their houses were circular. They had no canoes but crossed streams by weighing themselves down with stones while they waded. They lived by the river during the wet months of the year when their chief occupation was fishing, done at especially favorable places by means of nets and spears. The summer and fall months were spent on the sides and tops of the ridges, where the women were able to gather the bulbs, seeds, and nuts, and the men could unite in deer drives and other methods of hunting.

They usually buried their dead but burned those who fell in battle. They took the whole heads of their enemies as trophies, with which they were accustomed to dancing. Like the Yuki, the women tattooed their noses, cheeks, and chins. An adolescent ceremony was held for the girls, and most of the boys were trained with the candidates for medicine men, who were restricted as to their food, drink, and sleep for many days. Public exhibitions, consisting in part of dancing, were given by the candidates. Large conical dance houses were erected occasionally, and dedicated with ceremonies of dancing and singing; such were important occasions of a mingled social and religious character.

Many descendants live on the Grindstone Indian Rancheria of Wintun-Wailaki Indians in Elk Creek, California, as well as the Round Valley Reservation in Covelo, California.