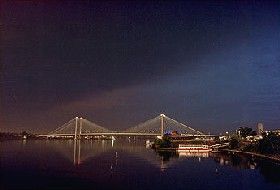 The first time I entered my house in Kennewick, Washington, in spite of its rundown and dirty condition, something about it seemed oh so right. It seemed like the house was welcoming me: telling me to come live within it. Not long after I moved in, at times it did not seem quite so welcome. And I had yet to meet ‘Ralph,’ my silent mischievous housemate, or at least start to realize I was not living alone. Ralph was, and is, invisible to me, except for one very brief occasion.

I had lived in my house some two weeks when one day I heard the faint sounds of a baby crying. It seemed to be coming from the other end of the house. At first I didn’t pay it much attention. Just one of the cats, I thought. I had several and one, Cookie the calico, had quite an extensive cat vocabulary.

I heard this baby-crying sound several different times and each time Cookie would not be in site, confirming my belief that Cookie had added another phrase to her speech-making. I had already assured myself that the neighbors on either side of me had no small children or babies. So, I concluded, it was the cat making the crying sounds. With that mystery solved, or so I thought, I continued unpacking boxes and making the place my own. If anything else unusual happened I was far too busy to notice.

Then one day I again heard the faint cry of a baby. As usual, it was coming from the other end of the house. It never mattered which end of the house I was in; the sound always came from the other end. But this time when the ‘baby’ cried, Cookie the cat was sitting beside me. As the ‘baby’ cried I stared down at the cat. Cookie was quieter than I had ever seen her. She never opened her mouth, nor twitched a whisker. It was not the cat making the sound and it was the last time I heard the ‘baby’ cry.

I had no idea what had created the crying sounds, and still don’t. There was nothing I could do but let the incidents pass and get on with enjoying my house. It was a busy time, cleaning the place to a state of livable. Its most recent residents, before me, had been of the squeaky four-legged and long-tailed variety. Though unseen they had dropped plenty of evidence of their having been there in every cupboard and drawer. That was no problem. Armed with pail and rag, several cats, and mousetraps, I soon had my unwelcome boarders mostly eliminated. But, as I discovered one afternoon, there was evidence of some other uninvited guest lurking about in my house. And evidently it was a rather windy entity.

When I bought this house one of the gals where I worked gave me a housewarming present. It was a wind chime made from an inverted clay flower pot that could be hanged by a leather thong. As it was winter still and I had yet to begin sorting out the yard, I hanged it from a hook that was in the ceiling in the dining area. As heavy as it was I feared to think how much of a big outside wind it would take to make it sway and activate the clay clapper. And, of course, being hanged inside with all the doors and windows tightly shut there wouldn’t be any breeze to move it anyway. But — there was.

One day I entered the dining area to see the heavy clay wind chime swaying back and forth. It must have been moving a good eight or ten inches in either direction. I just stood there, almost disbelieving what I was seeing. But I was seeing it as it swayed back and forth for several seconds before it abruptly stopped and remained still. My first thought then was that one of the cats had gotten up on the table, swatted the chime, heard me coming and scurried down and away. Knowing that my largest cat could stand on the floor on his tiptoes and reach up to the kitchen counter to at anything on the edge of the counter, I did some measuring from floor to countertop. I then measured from tabletop to the clay chime. The space from the tabletop to the hanging clay pot was a good two feet more in length than from the floor to the countertop. No cat had hit it and made it sway. The incident of the swaying clay pot occurred one other time shortly after that, then no more.

For a couple of years nothing more happened that seemed out of the ordinary. Oh, once in a while something would just happen to fall off of the top of the refrigerator — things I was sure had not been near the edge where they could fall. But, of course, I could have been mistaken. Besides they were just small things that couldn’t hurt anyone. I kept my big electric wok up there on top of the refrigerator and made sure it was well back from the edge. There was no fear of it falling. The heavy wok didn’t fall, but something else even more strange fell — of possibly flew.

By now there had been a few incidents of pictures falling, not down from the wall, but OUT from the wall. Actually, it had happened just a few too many times and I was starting to wonder and get suspicious. Houses just don’t make crying sounds or make hanging clay pots sway. I was seriously beginning to believe that something strange was going on. I had been in the house nearly three years now and although unusual things happened occasionally, nothing serious had happened that could harm anyone. Then something did happen.

I was in the kitchen on day, doing some of those necessary things you do in a kitchen. One of the things I did there that day, was duck, just as the lid to the wok came flying off the top of the refrigerator right at my head. Now things were getting serious, and scary.

As the wok lid clattered to the floor I shouted. And I to this day have no idea why I shouted what I did. I yelled: “Ok, Ralph, knock it off!”  So now my invisible and silent housemate had a name, and since that time I’ve had many occasions to repeat those five warning words. Why did I call him ‘Ralph?’ I don’t know. I don’t even like the name especially. But it has been a little over sixteen years that I have lived in this little house with Ralph.

Sometimes a year or more will go by and I will have no indication that Ralph is still lurking about. Then, suddenly, he will pull one of his innocent pranks. At the present time I would not believe he is here except that I have learned to make sure, when I go outside, not to close the door completely and to make sure the little thing in the middle of the doorknob that locks the door isn’t turned to lock. I learned the hard way early one morning when I put the dogs outside. For some reason that I do not remember, I stepped outside also — and closed the door completely. When I turned the doorknob to reenter — it was locked. It was no fun climbing in a window. At the time I didn’t even consider that Ralph had locked the door. Then one day my sister was here visiting. We stepped outside together and I closed the door completely. We were locked out. If Ralph did it he goofed. My brother-in-law was inside and let us in. I didn’t say anything about Ralph to them. They wouldn’t have believed me. But since then I have been very careful not to shut the door tight unless I’m on the inside. Many times now, after coming inside I have found the little thing on the doorknob turned to lock. Telling Ralph to “knock it off” doesn’t seem to always work anymore.