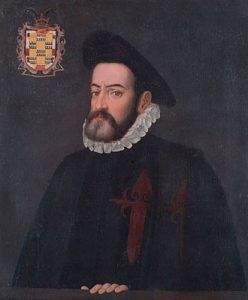 A Spanish Conquistador of the 16th century, Tristan de Luna y Arellano served with Francisco Vasquez de Coronado on his expedition to the Seven Cities of Cíbola and established Pensacola, Florida, one of the earliest European settlements within the present-day United States.

Born in Borobia, Spain in 1519, he was the son of Marshal Don Carlos de Luna, who would serve as the governor of Yucatan. He came to New Spain in about 1530 and grew up to marry Isabel de Rojas. During his years in Mexico, de Luna served in Coronado’s Expedition and helped in crushing an Indian rebellion in Oaxaca. In 1559, Mexican Viceroy, Don Luis Velasco, wanted a colony established in Florida to provide a stop for Spanish ships, discourage French settlement, and clear an overland trade route to Santa Elena, on present-day Parris Island, South Carolina, where another outpost would be founded.

Don Luis Velasco chose the wealthy, religious, and temperamental soldier, Tristan de Luna y Arellano, to lead the expedition. With a large force of 13 ships, 500 soldiers, and 1,000 colonists and servants, de Luna set out on June 11, 1569. The group sailed into present-day Pensacola Bay in mid-August. Anchoring in the bay they called “Ochuse”, they established an encampment onshore, calling it Puerto de Santa Maria. Unfortunately, de Luna would prove to be an inept leader. Leaving the ships and most of the supplies in the bay for two months, he sent several parties inland to explore the region. After three weeks, the scouts returned, reporting they had found only one Indian village. In the meantime, de Luna had dispatched one ship back to Vera Cruz to announce their safe arrival and request additional supplies. He had also readied two more ships to sail to Spain. What he did not do, was to unload their existing supplies for the colony from the ships in the bay.

On September 19, 1559, the bay was hit by a hurricane that destroyed the ships and most of the cargo. With the colony in serious danger, the soldiers and would-be colonists traveled up the Alabama River to the Indian village of Nanipacana, which they found abandoned. Calling the village Santa Cruz, they moved in for several months. Two relief ships arrived in November, which got the people through the winter. Another relief ship was promised in the spring, but, when it didn’t arrive, the settlers tried to plant crops; however, their efforts were unsuccessful as the soil was too sandy. By September 1560, the relief ship expected in the spring had still not arrived and the colonists were becoming desperate. When de Luna ordered the remainder of his force to march to the large Indian town of Coca, the men mutinied. Bloodshed was averted only by the intervention of the missionaries.

Though many people died along the way, others made it through the winter surviving on native foods such as corn, beans, and pumpkins. Tristan de Luna y Arellano fell ill. Relief did not arrive until March 1561, when the Spanish Viceroy sent Angel de Villafane to replace de Luna. Villafane left about 50 men at Ochuse and sailed with about 230 people to Santa Elena. They too were struck by a hurricane, but some of the ships survived. He then sailed the storm-battered fleet to Hispaniola, and then to Havana, Cuba, where many of his soldiers scattered. After three months in Cuba, Villafane returned to Ochuse to remove the remaining 50 men of the colony and sailed back to Mexico.

Tristan de Luna y Arellano survived his illness and later, in 1563, became the governor of Yucatan, a position he retained until his death in 1571. The area was not populated again by Europeans until 1698 when the Spanish founded the city of Pensacola.