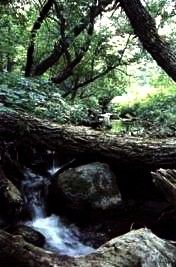 It is routinely talked about in this northeast part of South Dakota that the deep, thickly forested ravines of the eastern slope of the Prairie Coteau Hills are haunted. This belief can be traced back to the Dakota Sioux who once used the area as their primary hunting grounds. One place in particular, now called Sica Hollow State Park, is thought to be the location of a creation and vengeance story where various Native American mythical figures fought.

When the first Native Americans visited the location, they named it “Sica,” (pronounced she-cha) meaning evil or bad. Numerous Sioux legends recall mysterious happenings here. The local Dakota believed this to be the reason for the red-tinted water that gushed out of the springs in Sica Hollow. Actually, it was most likely the result of minerals in the water, but still, the legend persists to this day. One can still walk the Trail of Spirits, where supernatural forces are supposedly at work. When whites first stumbled upon Sica Hollow and the hills surrounding it, many of the fears of the supernatural were spread from the Dakota to the white settlers.

The first white man to make his home near what would one day become Sica Hollow State Park was named Robert Roi, in the 1840s. Finding the location to be ideal due to the abundant game, he soon made his home in a deep ravine. The local Indians thought Roi crazy for living in an area that they would not dare set foot in, much less make their home.

A few years later, an expeditionary force of U.S. government soldiers from Browns Valley set out to find Mr. Roi. With the intent of collecting strategic information on what was then the frontier, it took them a number of days just to get down into the wooded ravine were he lived. After they had visited with Roi, the soldiers left, agreeing with the local natives that the man was probably crazy to be living in such a place.

As the years passed, more and more whites settled the area and the mythical stories about Sica Hollow only grew. It was later believed that some sort of beast or “Big Foot” type man inhabited the dense woods. This fear came to a boiling point when several people disappeared at Sica Hollow in the 1970s.

Of the many people who joined the hunting parties for the missing persons, several who participated openly admitted that they were looking for some sort of beast. Such an idea was supported by recent local sightings of something apparently fitting that description. Others thought there might be a bear loose in Sica Hollow, but of beast, bear, or the missing persons, nothing was found.

Some parts of Sica Hollow, nearby Long Hollow, and other area ravines contain a form of quicksand due to the numerous springs. Additionally, there are vast stretches of densely forested gullies and harbor ravines that drop several hundred vertical feet. It is little wonder why mythical stories persist to this day. Over the years, nobody would live in Sica Hollow, which is one of the primary reasons that it is a national preserve and state park today.

Rising from the plains, these rugged, timber-covered hills and ravines were left after the last glacier receded less than 20,000 years ago. The Indians called them “Paha Tanka” or “Great Hills.” Through the park runs a National Recreation Trail called the Trail of Spirits. Along this path, you’ll see gurgling reddish bogs, the very same ones that the Sioux once thought were sprouting the blood and flesh of their ancestors. Swamp gas and stumps glow in the dark, and small waterfalls are heard echoing as trapped air escapes.  It is easy to understand why these anomalies of Mother Nature were held in awe by ancient Indian tribes and the subject of many legends.

For those that have been brave enough to stay the night in the park, many have reported hearing voices and chanting, the sounds of cries and war whoops, and even a few reported sighting of ghostly Indian braves.

Sica Hollow is as beautiful as it is spooky. The State Park is located 15 miles northwest of Sisseton, South Dakota, just of SD Highway 10.

The Legend of Sica Hollow – The Old Dakota legend and why Sica Hollow is called an evil or bad place, when once it was referred to Mokoce Waste. (Good Land).

I have additional comments of Sica from growing up in the area. There is a big difference in the park when walking, depending on the side of the stream you are on. There is also a big difference if you are in the park during day or night. The drumming is true. I have heard both one hit of a drum and drumming on several dates. Also, there are animals all over but it is rare to see them. In the winter, I have seen what could only be tracks of a cat but they were so large and wide spread, one in front of the other, I know the cat had to be about 5 feet long. I have also seen what looks like small camp fires that you can only see at a distance and if you go looking for them you will never find them. One thing you will never find is blood from an animal killing another animal even in winter. Sometimes when you walk the trails you will find that the trails are longer than they should be, meaning that the trail repeated its self.

Not far from Sica Hollow, a few friends and I were driving about 55-65 mph on a gravel road and out of the woods came what could only be described as a very large brown bear (the size of a mid sized car.) It ran in the ditch next to my car, keeping up with the speed of the vehicle for about a 1/4 mile, before running back into the woods as we came to a deep stream/bridge. I have also seen and heard things that I would never make known in an email or to some one that I don’t know. There are many “stories” that only locals know about Sica Hollow and its powers. It is a very beautiful “park” and I have tented there a few times and would do so again. — Malachi, May, 2008

Some good friends of the family had their family farm right next to Sica Hollow. One time when we were children…playing, we heard drumming and ran to the house scared stiff! The adults told us we were just hearing things, but we knew we HEARD drumming! I’ll never forget it! — Gary J., April, 2005

My wife and I just visited Sica Hollow for the first time this weekend 10-09-05. It was very pretty but a little spooky. The main thing that stuck out to us was the total lack of living things that you would normally see in the woods or fields. We saw no animals or birds on the hike in the hollow, and even insects, which are thick everywhere in South Dakota, were scarce. We saw some birds on the very edge of the Hollow, but even they were strangely quiet. That is what strikes you the most there – it is very quiet and still. You can hear the small brooks gurgling but that is all. I can understand why the Indians thought this place to be evil or haunted! I don’t know know if I could camp there overnight or not – we will see next summer as we plan to return. Sincerely, Doug DenBesten, October, 2005