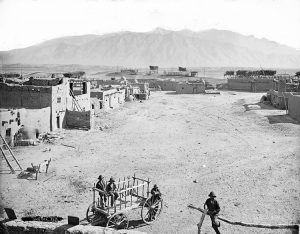 The Sandia Pueblo, located between Bernalillo and Albuquerque, is one of four Tiwa-speaking pueblos in New Mexico. Sitting on nearly 23,000 acres on the east side of the Rio Grande, the pueblo’s traditional name is Tuf Shur Tia, meaning “Green Reed Place,” referring to the green valley fed by the Rio Grande.

The pueblo site has been home to the Sandia people since at least 1300 A.D., where they have long cultivated the land, raised their families, and traded with other area tribes.

When Francisco Vasquez de Coronado’s expedition arrived in 1539, Sandia was one of the largest pueblo communities in the area, with about 3,000 people.

In 1617, the pueblo was occupied by Spanish explorers as the seat of the Mission of San Francisco. At that time, the Spanish began to enslave the pueblo members to labor in the building of churches and to work in area mines.

Over the years, resentment built among the Sandia people and other area pueblos resulted in the Pueblo Revolt in 1680. During the battles, the Sandia people fled to the Hopi lands in Arizona. As punishment for the insurrection, the governor of the territory, Antonio de Otermin, ordered the village burned. However, in the end, the Spanish were pushed out of the area and would not return for twelve years. New Mexico was reconquered by Diego de Vargas in 1692.

In the meantime, the Sandia people returned, and by 1742, the village was called home to 441 people. But, they now faced another enemy — that of the raiding Navajo, Apache, and Comanche Indians. Over the years, the population diminished, and by 1900, the pueblo was called home to just 74 people. 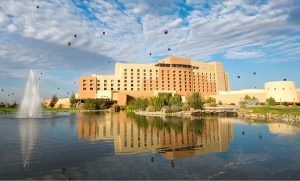 The Sandia are a federally recognized Indian tribe with just under 500 members. The people are traditionally Tiwa speakers, although retention of the traditional language has waned with later generations. Their tribal government operates the Sandia Casino, Bien Mur Indian Market Center, and Sandia Lakes Recreation Area.

The pueblo is located three miles south of Bernalillo off Highway 85.