A view of Mills New Mexico by Kathy Weiser-Alexander

Nestled in the Kiowa National Grassland, about 12 miles north of Roy, New Mexico, on Highway 39, sits the once thriving small town of Mills. Don’t blink, or you might miss what’s left as you pass by. Only a few buildings remain among foundations of former glory just off the highway, but Mills isn’t done yet.

A couple of abandoned “almost gones” in Mills New Mexico by Kathy Weiser-Alexander.

Situated in Harding County, the first iteration of Mills was established in 1898 by Melvin W. Mills, a homesteader who grew crops in Mills Canyon along the Canadian River. Mr. Mills would become a successful rancher, farmer, attorney, then later a Senator, Judge, and Governor. Growing a large orchard among other crops, Mills would transport fresh produce to Springer and Wagon Mound. Mills was also known for an earlier run-in with gunfighter Clay Allison during his involvement in the “Colfax County War” in the 1870s.

When the Southern Pacific Railroad ran its tracks from Dawson to Tucumcari and opened a depot in Mills in 1889, the town began to grow. The same year, a post office was established, with Hotel owner Henry Lebert meeting the train and taking it back to the hotel for distribution. But hardship was just around the corner as a flood took out the town in 1904. 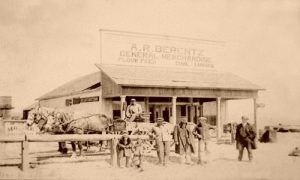 Not to be deterred, landowners Cress and Pelphey provided 40 acres for a new townsite, and it was boosted by New York’s Wilson Company, who invested in building a store, elevator, bean house, lumberyard, hotel, stockyard, and homes for their employees.

In 1913, Mills had grown enough that it boasted five hotels, a theatre, dance hall, four doctors, a hospital, a barbershop, three stores, a bank, two saloons, three churches, a school, a boarding house, and more. In the early 1920s, the original school burned down, but a new one was built next to the grain elevators in the middle of town.

At its peak, Mills boasted 3,000 residents, but national hardships such as the Great Depression and the Dust Bowl, coupled with the closing of the railway, eventually led to the downfall of Mills. 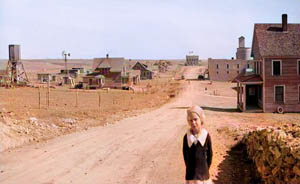 In 1940, the small community had the best basketball team in the state when the Mills Bobcats went undefeated through the season. However, an overconfident coach decided to play his second team against Springer and send the first string to the pool hall. They wouldn’t make it to the game in time as Mills’ second-string lost by one point in the quarterfinal round.

The school closed in the early 1940s, and the two-story brick high school stood until it was torn down in the early 1980s. The Post Office eventually moved into the old bank building in 1944, and, despite only having only a few residents in town, it is still open and active.

Mills Canyon nearby also has a storied history as a stage stop along the route from Kansas to Santa Fe. Tales of gambling and eastern girls held hostage persist to this day. We also heard tales of how Indians used the area of Mills Canyon to raid wagon trains, escaping into the canyon terrain. Today Mills Canyon Recreation Area provides fishing, hunting, and hiking trails along the Canadian River.

©Dave Alexander/Legends of America, updated May 2021.

Harding County, New Mexico (website no longer valid)
Information from a local Sheriffs Officer who stopped during our visit.