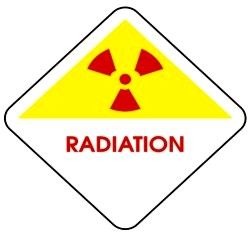 The area between Boulder and Basin, Montana, is filled with defunct gold and uranium mines that emit radioactive radon gas, the queen of which is The Merry Widow Mine. Radon gas is a colorless, tasteless, inert element formed by the aging or disintegration of radium.

So, what is the attraction to a radioactive radon mine? Purportedly, the radon gas contains healing properties that cure the aches and pains of arthritis, diabetes, eczema, sinusitis, migraine, lupus, asthma, and other chronic cripplers.

The whole thing began in the 1950s after an arthritic California woman visited a Boulder uranium mine and found relief.   Soon, she told all her friends, who told their friends, and before you know it, Life Magazine picked up the story, and the whole world then knew of the radon potential for relief.

Though the effects of radon have been studied for decades, documenting relief for all manner of ailments, no one really knows why. One claim is that the gas stimulates the nerves and helps the human body heal itself.   Other researchers say the gas stimulates the pituitary gland to produce health-giving hormones and natural steroids. Whatever it is, though, the visitors of the Merry Widow Mine declare that it works in healing all manner of aches and pains!

A lot of people say radon gas, a natural byproduct from the earth, is bad for you.  In fact, it plagues real estate sales in many areas of the U.S., as people fear breathing the “atomic” air and its potentially harmful side effects. However, in this area, there is quite a different opinion about radon. 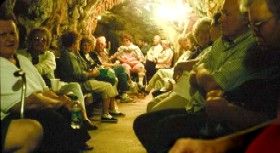 Inside the Merry Widow Mine, people relax while they’re curing their aches and pains. Photo by Landon Nordeman, courtesy National Geographic.

The Merry Widow Mine is a tunnel into the mountain, with a temperature that remains around 60 degrees in both winter and summer. The typical vacation at the Merry Widow Health Mine lasts anywhere from a week to two weeks, and visitors are recommended to sit in the mine two or three times a day. Visitors also soak their feet in the freezing cold mineral waters or drink the mine water, which they claim is very productive to good health. The water at the Merry Widow Mine has been tested by the State Health Department and found to be pure for drinking purposes.

The mine shafts tout radon levels as much as 175 times the federal safety standard for houses. Yet, visitors claim miraculous recoveries and disease remissions in the damp, cool passages. Some have allegedly arrived in wheelchairs, then walked out on their own.

This mine, as well as others in the area, appeal to many types of people, particularly those who like the “natural” healing aspects, such as the Amish or the Mennonites. Each summer, hundreds of people come to the radon health mines to relax and soak up the therapeutic aura, swearing by the healing effects of the radon gases.

When visiting the mine, it is advisable to bring warm clothing.

Nearby, there is much to see and do when you’re not healing yourself inside the mine, such as the ghost towns of Comet and Gray Eagle, Boulder Hot Springs, which offers natural hot water pools, the Lewis and Clark Cavern State Park, and several historic sites and museums.

Open between March 1st and November 15th every year, the Merry Widow Health Mine and Campground is located east of I-15 at Exit 156. 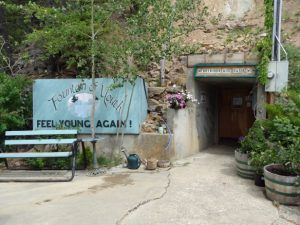