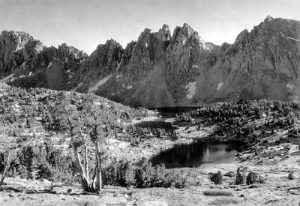 On Mt. Kearsarge, one of the high peaks of the Sierras in Inyo County, California, and near its summit, at an elevation of 13,000 feet above sea level, is located a gold mine that was known some years ago as the Rex Montez. It was far above the timberline, in the region of perpetual snow. Consequently, it was quite expensive to work for all supplies transported on pack mules, including wood for domestic purposes, while water was obtained from melted snow. The boarding and lodging houses were made comfortable, for during the winter for three and four months, the miners were cut off from all communication with the town of Independence, only eight miles distant and in plain sight from the mine. Work, however, was prosecuted nearly as well in winter as at any time, for even in August, the mine’s tunnels and drifts were like refrigerators, as their walls were covered with ice all the year through. The mill was at the foot of the main peak, five miles down, and was run only in the summer when the pack trail was open.

Occasionally in the winter, men would venture down from the mine, but the descent was so perilous, and the return so difficult and full of danger, that this was a rare event. On one occasion, a Chinese cook employed at the mine, in trying to make the descent to celebrate China New Years in Independence, was lost and perished in the snow. His body was not found until in the summer afterward when a miner descending by a shortcut found it frozen in a snowbank in a deep ravine. The Chinese of Independence had made efforts to find the body and had offered a reward of $500 to anyone who would produce it. The finder dug it out of the snow, carried it down some distance, and hid it in the brush. Then he went into town and claimed the reward, which the Chinamen could not pay from some financial stress. He did not lose much time negotiating and hurried matters to a conclusion by telling them the body was hidden on the sunny slope and would soon thaw out. That caused them to hustle around, and they succeeded in raising $250, which they tendered and which the miner finally accepted and proceeded at once to deliver the goods. The bones were in due time sent to China. The miner went on a spree that ended sometime after in his shooting and killing the Sheriff. He was duly tried and sentenced to death but escaped that fate by being adjudged insane, and years after, this writer saw him in the Stockton Asylum. The cunning leer of recognition he gave indicated some “method in his madness.”