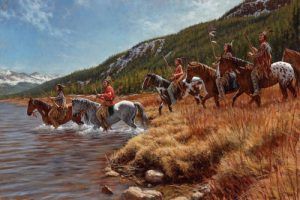 On September 29, 1879, the same day that the Meeker Massacre occurred on the Ute tribe’s White River Reservation in northwestern Colorado, a column of 150-200 troops under Major Thomas T. Thornburgh from Fort Fred Steele, Wyoming were marching to the reservation.

When the soldiers were approximately 18 miles from the Indian agency, they were attacked by a Ute fighting force of about 200-300 warriors. The soldiers immediately formed a wagon corral and sent out a messenger with a call for aid. The battle would last for a week. Most of the shooting and fatalities occurred during the first hours of the battle. But the Ute, holding ground on the ridges surrounding Milk Creek, had the army troops pinned down in a low spot in the valley. During that time, 35 black cavalrymen, based at Fort Lewis, Colorado, broke through the Indian line to reinforce their comrades-in-arms. But the additional troops were not enough to break the siege.

In the battle, 13 soldiers, including Major Thornburgh, lost their lives, and another 43 were wounded. At least 19 Ute Indians were killed. Afterward, the Government imprisoned several of the Ute leaders and placed the tribe on a new reservation in Utah. 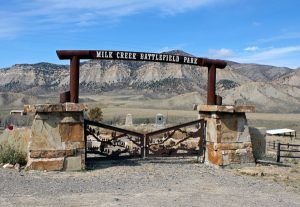 The battlefield site is in Moffat County, Colorado, on an unimproved road, about 20 miles northeast of Meeker. The battlefield, situated in a brush-lined canyon, appears today much as it did in 1879. A monument bears the names of the dead soldiers.