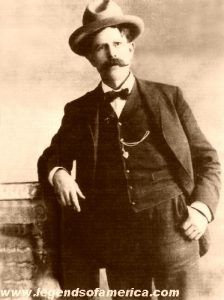 Joseph “Joe” S. LeFors was a U.S. Deputy Marshal who pursued several train robbers and other outlaws in the northwest.

Born in Paris, Texas, in 1865, LeFors grew up to be a cowboy, and after driving a herd to Wyoming in 1885, he stayed there. Later he would become an inspector-detective responsible for tracking stolen cattle in Wyoming and Montana. In the process, he was involved in several gunfights. In 1899, he rode with a posse sent to capture those responsible for the Willcox Train Robbery and was appointed as a U.S. Deputy Marshal the same year. In this capacity, he pursued several train robbers and other outlaws in the northwest.

In 1901, he became famous for arresting and documenting a confession from the former lawman turned hired killer, Tom Horn. Horn was later tried and sentenced to death. and hanged. In 1902, Lefors allegedly worked for the Iron Mountain Ranch Company in Helena, Montana, to infiltrate a gang of cattle rustlers. However, he was unsuccessful in aiding the gang and was fired in 1904.

Afterward, little is known about his life other than he died on October 1, 1940, and is buried in the Willow Grove Cemetery in Buffalo, Wyoming.