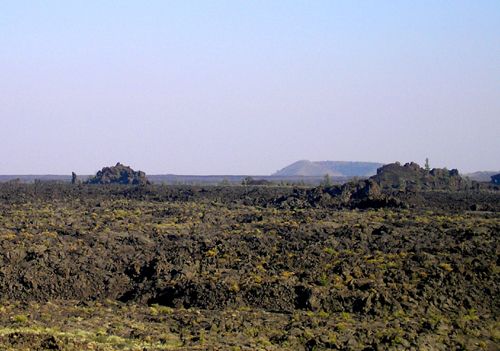 Craters of the Moon National Monument and Preserve, located in southern Idaho is a vast ocean of lava flows with scattered islands of cinder cones and sagebrush. This bizarre landscape covers some 715,000 acres of geologic wonderland that provides views of volcanic craters, lava tubes, deep cracks, and vast lava fields on Idaho’s Snake River Plain.

Rocks from relatively recent volcanic eruptions dominate the landscape created by “fissure eruptions” that occurred along cracks in the earth’s crust beginning some 15,000 years ago. Though volcanic eruptions have occurred on the Snake River Plain for many millions of years, Craters of the Moon was formed by eruptions that represent the last period of active volcanism in this area. The most recent activity occurred 2,100 years ago.

Unlike other ancient lava flows, visitors will not see a large volcano with steep slopes and a summit crater, as these volcanic fissures are quite different. Each cone is a small volcano, from which eruptions were of very fluid basaltic lava from which gases could easily escape. Without high gas pressure, eruptions tended to be very mild but produced extensive lava flows.

The National Monument encompasses the entire Great Rift, which contains a huge concentration of volcanic landforms and structures along the more than a 50-mile zone of fractures and eruptions. A composite field made up of about 60 lava flows and 25 cones, it is the largest lava flow type in the lower 48 states.

Plants and animals began occupying the area while the once molten lava fields were still cooling. Some animals, like the big horned sheep and grizzly bear, have been gone for almost 100 years, but many other animals continue to thrive here. Difficult access due to rugged terrain and a lack of water discouraged people from altering the landscape with roads, buildings, farms, and power lines which occupy much of the present-day Snake River Plain. Though people never made permanent homes in the lava flows due to the harsh conditions, numerous Northern Shoshone artifacts, temporary shelters, and hunting blinds have been found in the monument, indicating that they hunted and gathered tachylite (a very dense form of basalt) for arrow points.

In the late spring, tiny wildflowers adorn the cinder slopes of the monument. Because they are so evenly spaced, they appear to have been planted in neat rows. However, this is not the case — plants here must compete for a very limited amount of water; consequently, they cannot grow too close together and survive. The plants space themselves naturally according to the availability of limited resources.

Unique natural features at Craters of the Moon include lava tubes caves such as Indian Tunnel, which is passable for 800 feet; Big Cinder Butte, at 700 feet, one of the largest purely basaltic cinder cones in the world; and the Blue and Green Dragon flows, which are named for their striking lava colors. The monument also contains large areas of sagebrush steppe as well as numerous kipukas. Kipukas are isolated islands of remnant vegetation protected by surrounding lava flows that act as small, virtually undisturbed havens for native plants and animals.

Craters of the Moon is a dormant rather than an extinct volcanic area. The volcanoes here are not dead, only sleeping. Indications of impending eruptions — earthquakes, the opening of steam vents, and ground swelling — have not occurred recently. However, geologists believe that the area will become active again within the next 1,000 years.

Today, visitors can explore the isolated landscape on a number of hiking trails which provide unique opportunities to encounter plants and animals in various lava habitats. A driving tour is also available called Seven-mile Loop Road. A Visitor’s Center provides additional information and exhibits and a campground is available during the summer months. 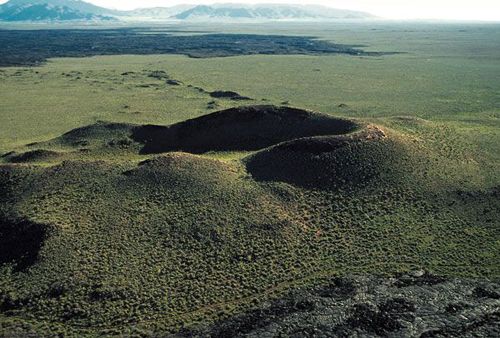 The visitor center is located approximately 18 miles southwest of Arco, Idaho on Highway 20 and 50 miles northeast of Shoshone on Highway 26.