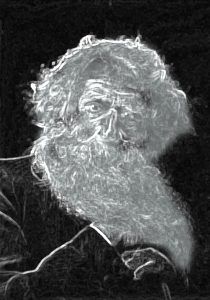 Several years ago, in 2000, my husband and I moved into an old apartment building in Woodstock, Ohio, with our four-month-old daughter. After a couple of months, we became aware of cold spots in the doorways and the playroom corner. As our daughter grew a little older, we noticed that she would sit in this corner for hours, playing, talking, and laughing as though someone was there with her. I started asking her who she was talking to, and she said Tabby and Chuck, who lived there.

One night when we were lying in bed, I looked up and was startled to see a little boy and an adult man standing in the doorway. This continued with such frequency that we started sleeping in the front room with the lights on. Often, the lights would suddenly get bright, then do dark, fluttering back and forth.

One night when my daughter woke up crying and screaming, I saw an older man staring at her. Quickly grabbing her, I covered both our heads, then when I looked back, he was gone.

About a week later, when we were upstairs visiting our neighbors, our daughter fell down the flight of 15 stairs. Running to the bottom, I was amazed to see that she had not a mark on her, not even a scratch. She kept saying that the boy had saved her.

After this, the cold spots got worse, and lights began to shoot across the rooms. When toxic mold began growing in the apartment, we moved. The people upstairs also had to move about a month later due to the mold. The last night we spent in the apartment was the worst of them all. As we slept on the living room floor, we listened to the sounds of screams throughout the night. When we look at photographs we took while living in that apartment, they are filled with dark spots.