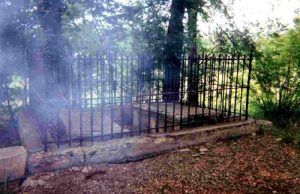 Do you believe that ghosts can be seen in photographs?  Well, we were undecided, but, during our travels to ghost towns and other old places, we took a couple of pictures that simply can’t be explained.  While photographing these places, we were not “ghost hunting;” however, we were in places where ghosts are likely to linger. Let us know what you think.

While writing an article for the Maxwell Land Grant for our New Mexico section of this website, we took this photo of the Maxwell family graves in Cimarron, New Mexico.  Though it was cloudy that day, it was not  foggy and of the many pictures taken, this was the only one with this appearance.

This photograph was taken while we were exploring the Mystery of the Eagle Nest Lodge in Eagle Nest, New Mexico. While the diamond shape forms in the upper left corner can be explained by lens flare, what about all of the cloudiness?  It was a beautiful, sun-shiny day when this photograph was taken.  When I showed this photo to a psychic friend of mine, she described the back of her neck as prickling.  She felt strongly that a family was killed in this room that was obviously destroyed by fire. 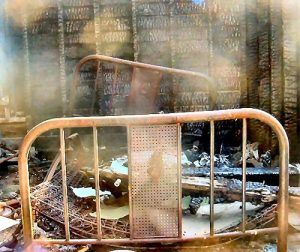 Readers Comments:   I got immediate chills when I viewed the photo of the dilapidated bed. On the left side in the haze I can see a boys face screaming in pain and in the center of the headboard I can see a mans face with a painful look. — Lisa

In the case of the pictures below, we were ghost hunting, and boy-oh-boy, we saw some interesting stuff at the Lemp Mansion in St. Louis, Missouri.  You can read the whole story and see even more pictures by clicking Here! 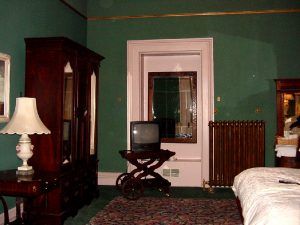 The Charles Lemp Room. Look very closely at the mirror on the door. Do you see anything??? Click on the picture to see a larger version and you can also see several orbs in this room, October, 2004, Kathy Weiser. 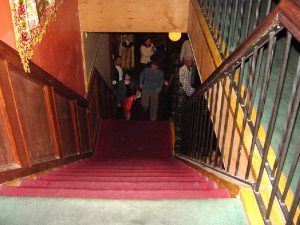 The staircase at the Lemp Mansion is said to be one of the three areas of ghostly activity. When you click on picture to view an enlarged version, you can clearly see several orbs at the top. Even more creepy, see the little boy peeking through the banisters on the right side of the photograph. There were NO children with us that night. Moreover, that landing is more than 15 feet high!! October, 2004, Kathy Weiser.