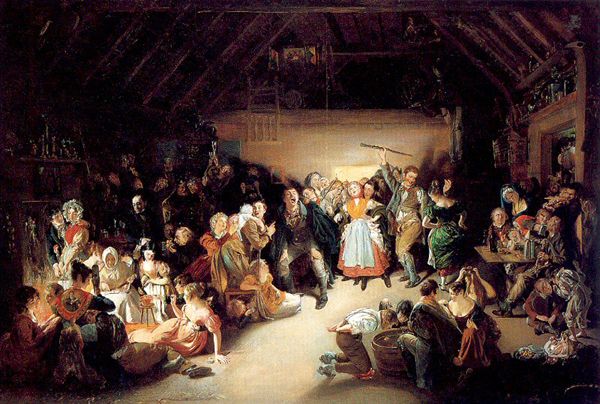 Snap-Apple Night, by Daniel Maclise, shows a Halloween party in Blarney, Ireland in 1832 with children bobbing for apples and adults playing a game with a hanging apple.

There Peggy was dancing with Dan
While Maureen the lead was melting,
To prove how their fortunes ran
With the Cards could Nancy dealt in;
There was Kate, and her sweet-heart Will,
In nuts their true-love burning,
And poor Norah, though smiling still
She’d missed the snap-apple turning.

On the Festival of Hallow Eve.

One of the oldest holidays still celebrated, this seemingly bizarre tradition originated hundreds of years ago with the Celtic people of pre-medieval Europe. The Celts were a diverse group of tribal societies of the Iron Age and Roman-era Europe, which are thought to have originated in Austria about 800 BC. All speaking some version of the Celtic language, by 450 BC, the culture had expanded across Europe. 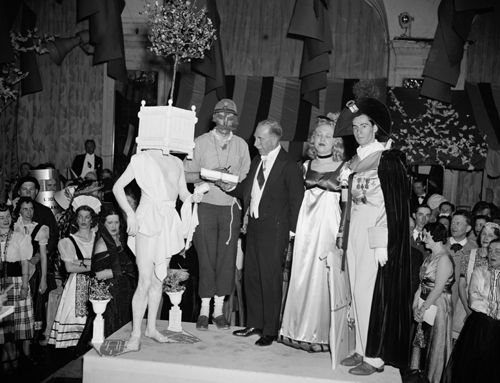 The Celts celebrated the end of the light half with the festival of “Samhain,” which roughly translated to “summer’s end” in the old Irish language. It was regarded as the “Celtic New Year,” which not only celebrated the end of harvest and the beginning of a new year but also, honored the dead. During this time, the ancient Celts believed that the border between this world and the Otherworld became thin, which would allow both harmless and evil spirits to pass through and roam the streets and villages.

The event was celebrated with bonfires, feasts, and many superstitions. Following the Roman conquest of Britain, British Celts adopted the Julian calendar and fixed the date of Samhain’s observance to November 1st. The evening before was referred to as All Hallows Eve, from which, the name “Halloween” comes from. To honor their ancestors and ensure that next year’s crops would be plentiful, treats and gifts were left out for their spirits the night before. To ward off harmful spirits, the Celts wore costumes, masks, veils, or blackened their faces, and also left gifts in hopes of pacifying them. These customs evolved into trick-or-treating. The event also was marked by taking stock of food supplies and slaughtering livestock for winter stores. The bonfires played a large part in this tradition, as people and their livestock would often walk between two fires as a cleansing ritual.

While the holiday began strictly as a Celtic festival, aspects of Roman religion were incorporated into its observance over the four centuries of Roman rule in Britain (43-410 AD).  One of these is the tradition of bobbing for apples and making candied apples, in honor of the Roman goddess of fruit trees and gardens — Pamona. As Christianity spread throughout the world, pagan holidays were either Christianized or forgotten. Halloween continued as it is the evening before All Saints Day, which was created by Christians to convert pagans, and is celebrated on November 1st. The Catholic church honored saints on this designated day. 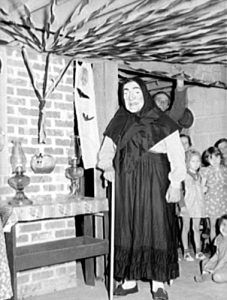 In the early days of the United States, many settlers came from England, Ireland, and Scotland, bringing their traditions and beliefs with them. Other immigrant groups added their own cultural influences including witchcraft, voodoo beliefs, black cats and more. The event was celebrated differently in various areas with barn dances, parades, firecrackers, and more superstitions.

By the late 1800s, Halloween costumes were popularized by adults but, by the turn of the century, they were mostly worn by children. As the holiday evolved as a children’s holiday, towns and cities began hosting large community celebrations and by the 1940s, trick-or-treating had become widespread.

Though there are some that believe the holiday is evil, honoring pagan rituals or the occult, the vast majority celebrate it as a day of fun. In fact, in the United States, it remains a popular holiday.