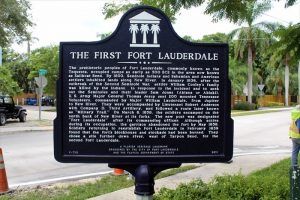 Fort Lauderdale was a U.S. Army post established in 1838 during the Second Seminole War by Major William Lauderdale, Tennessee Volunteers, in the present-day city of Fort Lauderdale, Florida. The fort was relocated twice in 1839 and finally abandoned in 1842.

Post #1 – In early 1838, General Thomas S. Jesup dispatched Major William Lauderdale, and his 200 mounted Tennessee Volunteers along with Lieutenant Robert Anderson and a company of 3rd U.S. Artillery to present-day Fort Lauderdale to pursue hostile Seminole Indians in the area. On March 6, 1838, Major Lauderdale established a post on the New River’s north bank at present-day SW 8th Terrace and SW 4th Court. The post was built out with a 30-foot square, two-story-tall blockhouse that was later enclosed with a 60′ by 50′ stockade. Major Lauderdale was joined by Lieutenant Colonel James Bankhead and four artillery companies from Fort Dallas. Major Bankhead assumed command of 600 man force. Actions against the hostiles resulted in the surrender of some 44 hostile Indians, and Major Lauderdale and his volunteers departed for Fort Jupiter on April 4, 1838. The remainder of the garrison abandoned Fort Lauderdale on May 7, 1838. The Seminoles destroyed the fort a few months later.

Post #2 – In February 1839, Company K of the 3rd U.S. Artillery under Captain William Davidson reestablished Fort Lauderdale at a new location. The new location was closer to the ocean and built out as a temporary post with tents surrounded by pickets, a single watchtower, and a canvas-covered log blockhouse. The second post was located near present-day SE 9th Ave and SE 4th St west of Tarpon Bend. 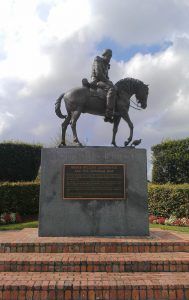 Post #3 – A more permanent post was begun even closer to the ocean, and it was completed by the end of September 1839. The new post was more substantial than either of the first two forts, with two-story blockhouses at three angles and a substantial stockade. The new fort was garrisoned until January 1842 and then abandoned as the Second Seminole War came to an end. The third post was located approximately at the present-day south beach parking lot across from Bahia Mar.

After the fort was abandoned, the area remained largely empty, as the remaining Seminole withdrew to Pine Island (near present-day Hollywood Seminole Indian Reservation), and only a handful of settlers were known to live in all of what eventually became Broward County. As there was no overland route into or out of the area, no significant settlement was undertaken until the 1890s.

There are no remains of any of the posts today.