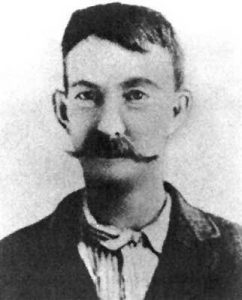 Edward  O’Kelley shot and killed Robert Ford, who had previously killed Jesse James, with a shotgun in Ford’s saloon in Creede, Colorado on June 8, 1892.

Edward Capehart O’Kelley was born on October 1, 1857, in Harrisonville, Missouri to Margaret Ann Capehart. Though Margaret married Dr. Thomas Katlett O’Kelley in July 1857, it is thought that he was not Edward’s father.

When Edward grew up, he migrated to Colorado where he worked as a lawman, despite having a terrible temper. In Bachelor City, he was employed as the town marshal, and, later, as a deputy sheriff of Hinsdale County. Ford wasn’t the only man that the ill-humored O’Kelley killed. In 1891, he shot a black man named Ed Riley in Pueblo, Colorado, because the other man had accidentally stepped on his toes.

In 1892, Ford was operating a tent saloon in the silver mining camp of Creede, Colorado and on June 8, 1892, while Ford was preparing to open his saloon, O’Kelley walked into the tent with a shotgun. When O’Kelly entered he called out “Hello Bob”, Ford turned around and O’Kelley fired his shotgun, hitting Ford in the neck and killing him instantly.

Though acquainted with the James family in Missouri, his association with them is unclear, though some believe that he may have been a short-term member of the James Gang. Many have theorized O’Kelley killed Robert Ford in revenge for Jesse James’ death. However, others think that he simply did it for the recognition of being the man that shot the man that shot Jesse.

Edward was immediately arrested after the killing and after being tried and convicted, was sentenced to life in prison in the Canon City Penitentiary on July 12, 1892. However, a decade later, Missouri friends won him a pardon and he was released in October 1902. 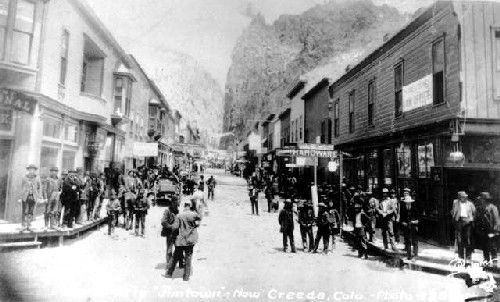 It didn’t take him long to get back in trouble again, as, on January 30, 1903, he was arrested for drunkenness and vagrancy in Pueblo, Colorado. After his release, he made his way to Oklahoma City where he got into an altercation with a police officer named Joe Burnett on January 13, 1904. When the conflict escalated to gunplay, O’Kelley was shot down by the officer.