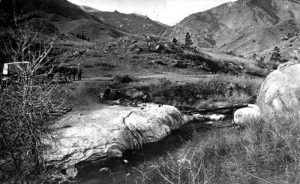 Among the sandstone columns of the Colorado foot-hills stood the lodge of Ta-in-ga-ro (First Falling Thunder). Though swift in the chase and brave in battle, he seldom went abroad with neighboring tribes, for he was happy in the society of his wife, Zecana (The Bird). He often went with her to a post on the New Mexico frontier to sell beaver and wild sheep-skins. While at this fort, a Spanish trader saw the pretty Zecana and, determining to win her, sent the Indian on a mission into the heart of the mountains with a promise that she should rest securely at the settlement until his return.

On his way, Ta-in-ga-ro stopped at the spring in Manitou, and after drinking, he cast beads and wampum into the well in oblation to its deity. The bubbling water flung out the offering, and as he stared, distressed at this unwelcome omen, a picture formed on the surface–the anguished features of Zecana.

He ran to his horse, galloped away, and paused neither for rest nor food till he had reached the post. The Spaniard was gone. Turning, then, to the foot-hills, he urged his tired horse toward his cabin and arrived, one bright morning, flushed with joy to see his wife before his door and to hear her singing. When he spoke, she looked up carelessly and resumed her song. She did not know him. Reason was gone. 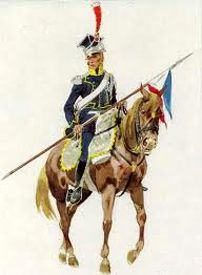 It was his cry of rage and grief when, from her babbling, Ta-in-ga-ro learned of the Spaniard’s betrayal that brought the wandering mind back for an instant. Looking at her husband with a strange surprise and pain, she plucked the knife from his belt. Before realizing her purpose, she had thrust it into her heart and had fallen dead at his feet. For hours he stood there in stupefaction, but the stolid Indian nature soon resumed its sway.

Setting his lodge in order and feeding his horse, he wrapped Zecana’s body in buffalo skin and then slept through the night in sheer exhaustion. Two nights afterward, the Indian stood in the shadow of a room in the trading fort and watched the Spaniard as he lay asleep. Nobody knew how he passed the guard.

In the small hours, the traitor was roused by the strain of a belt across his mouth, and leaping up to fling it off, he felt the tug of a lariat at his throat. His struggles were useless. In a few moments, he was bound hand and foot. Lifting some strips of bark from the low roof, Ta-in-ga-ro pushed the Spaniard through the aperture and lowered him to the ground, outside the enclosure of which the house formed part. Then, at the embers of a fire, he kindled an arrow wrapped in the down of cottonwood and shot it into a haystack in the court. In the smoke and confusion thus made, his escape was unseen, save by a guardsman drowsily pacing his beat outside the square of buildings. The sentinel would have given the alarm had not the  Indian pounced on him like a panther and laid him dead with a knife-stroke.

Catching up with the Spaniard, the  Indian tied him to the back of a horse and set off beside him. Thus they journeyed until they came to his lodge, where he released the trader from his horse and fed him but kept his hands and legs hardbound and paid no attention to his questions and his appeals for liberty. Tying a strong and half-trained horse at his door, Ta-in-ga-ro placed a wooden saddle on him, cut off the Spaniard’s clothes, and put him astride of the beast. After he had fastened him into his seat with deer-skin thongs, he took Zecana’s corpse from its wrapping and tied it to his prisoner, face to face.

Then, losing the horse, which was plunging and snorting to be rid of his burden, he saw him rush off on the endless desert and followed on his strong steed. At first, the Spaniard fainted; he struggled to get free on recovering, but his struggles only brought him closer to the dreadful thing before him. Noon-day heat covered him with sweat, and blood dripped from the wales that the cords cut in his flesh. At night he froze uncovered in the chill air, and, if for an instant his eyes closed in sleep, a curse, yelled into his ear, awoke him. Ta-inga-ro gave him a drink from time to time but never food, so they rode for days. At last, hunger overbore his loathing, and sinking his teeth into the dead flesh before him, he feasted like a ghoul. 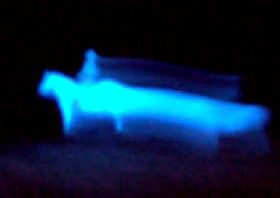 Still, they rode, Ta-in-ga-ro never far from his victim, on whose sufferings he gloated until a gibbering cry told him that the Spaniard had gone mad. Then, and not till then, he drew rein and watched the horse with its dead and maniac riders until they disappeared in the yellow void. He turned away but nevermore sought his home. To and fro, through the brush, the sand, the alkali of the plains, go the ghost riders, forever.