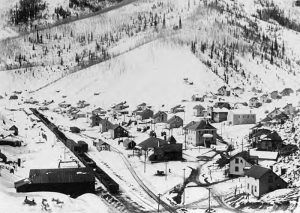 Clear Creek, Utah, was founded in the 1870s as a logging camp that supplied lumber to the nearby mining town of Winter Quarters. At that time, the settlement was referred to as Mud Creek.

In 1898, coal was found beneath the settlement, and the Utah Fuel Company opened a mine in 1899. It was called Clear Creek because of the clear stream of water which flowed through the valley. When the mine was first opened, the coal was so near the entrance that the men could walk out for lunch. Twenty Clydesdale horses pulled the coal cars out of the mine to the tipple. The Clear Creek mine was the highest of all of Utah’s coal mines, at an elevation of 8,200 feet.

Initially, the miners lived in tents until wooden houses were built. The Denver & Rio Grande Western Railroad built a spur line from Scofield to Clear Creek’s mine. The trains operated twice daily in the morning and evening. When the railroad became blocked with snow, the miners worked for the railroad company helping clear the tracks.

A tramway was utilized to get the coal from the mine to the railroad cars, and water was used from the creek to generate steam power. A sawmill provided timber for the mine, and the excess was shipped to Castle Gate and Sunnyside. 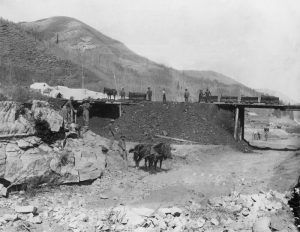 In 1900, the Utah Fuel Company built 25 homes, a hotel, a store, a hospital, a schoolhouse, a workshop, and a town’s water plant. The camp was never incorporated, and the only officers were a Justice of Peace and a constable.

Due to the camp’s isolation and the heavy snows in the winter, the amusements consisted mostly of winter sports and dances twice a week. However, a theatrical group was formed early on, and an amusement hall was built.

In 1908 the number of miners peaked at 450 men, at which time, approximate production was 2,000 tons of coal per day. By the next year, the mine ranked second only to Sunnyside in its production.

In 1930, the need for coal began to decrease, and by the next year, production at the Clear Creek Mine was reduced to just 5,000 tons for the entire month of December 1931.

By 1955, the mine had cut production, and the town’s population had decreased to 150. 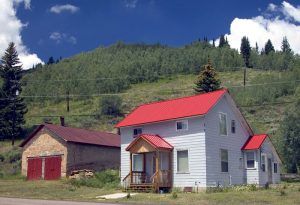 In the 1960s, the Alpine School District began to rent the buildings at Clear Creek to operate a summer camp. In 1973, the school district bought the Mountain Fuel Company’s property, which included six houses and a large maintenance building. The houses were repurposed as dormitory cabins, and the maintenance building was outfitted to serve as a kitchen, dining, and large assembly facility. By the next year, it was ready for groups of students. Since that time, the grounds have expanded to year-round use of the camp facilities.

Today it still serves as the home of Clear Creek Camp, and over 7,500 students participate in various programs at the camp each year.

The site is located at the south end of State Route 96, about six miles south of Scofield.