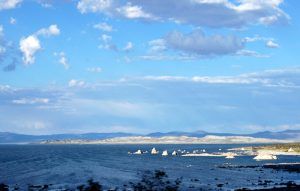 The Lost Cement Mine is a legendary gold vein situated in the eastern Sierra Nevada of California.

In 1857 two German men traveling by a California-bound wagon train left the rest of the group and headed out on their own. Winding up in the Mono Lake region of central California, one of the men would later describe the area as “the burnt country.” While crossing the Sierra Nevada near the Owens River’s headwaters, they sat down to rest near a stream. Here, they noticed a curious-looking rock ledge of red lava filled with what appeared to be pure lumps of gold “cemented” together, hence, the name.

The ledge was so loaded with the ore that one of the men didn’t believe it to be real, laughing at the other as he pounded away about ten pounds of the ore to take with him. The believer drew a map to the location, and the two continued their journey. Along the way, the disbeliever died, and the gold-laden traveler tossed the majority of the samples. After crossing the mountains, he followed the San Joaquin River to the mining camp of Millerton, California. During his journey, the German had become ill and soon went to San Francisco for treatment. He was diagnosed and cared for by Dr. Randall, who told the man he was terminally ill with consumption (tuberculosis). With no money to pay the doctor and too ill to return to the treasure, he paid his caretaker with the ore, the map he had drawn, and provided him with a detailed description.

Dr. Randall shared this knowledge with a few of his friends, and together they arrived at old Monoville in the spring of 1861. Engaging additional men to help, Randall’s group began to prospect on a quarter-section of land called Pumice Flat. Thought to have been some eight miles north of Mammoth Canyon, the 120 acres were near what became known as Whiteman’s Camp.

Word spread quickly, and before long, miners flooded the area hunting for the gold-laden red “cement.” One story tells that two of Dr. Randall’s party had, in fact, found the “Cement Mine,” taking several thousand dollars from the ledge. Unfortunately for those two men, the area was rife with the Owens Valley Indian War, which began in 1861. 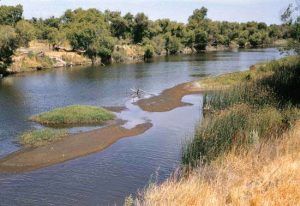 The Paiute Indians, who had heretofore been generally peaceful, balked at the large numbers of prospectors who had invaded their lands. The two miners who had allegedly found the lost ledge were killed by the Indians before they were able to tell of its location.

Though the “cement” outcropping was never found, the many prospectors who flooded the eastern Sierra region did find gold, resulting in the mining camps of Dogtown, Mammoth City, Lundy Canyon, Bodie, and many others.

The lost lode is said to lie somewhere in the dense woods near the Sierra Mountains headwaters of the San Joaquin River’s middle fork.