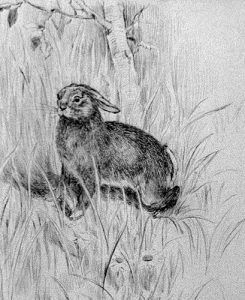 The Indian is a great story-teller. Every tribe has its traditions, and the elderly men and women like to recount them, for they always find listeners. And odd stories they tell, too. Just listen to this, for example. It is a legend among the tribes of Arizona.

While Ta-Vwots, the hare-god, was asleep in the valley of Maopa, the Sun mischievously burned his back, causing him to leap up with a howl. “Aha! It’s you, is it, who played this trick on me?” he cried, looking at the Sun. “I’ll make it warm for you. See if I don’t.”

And without more ado h, set off to fight the Sun. On the way, he stopped to pick and roast some corn, and when the people who had planted it ran out and tried to punish him for the theft he scratched a hole in the ground and ran in out of sight.   His pursuers shot arrows into the hole, but Ta-Vwots had his breath with him, and it was an awfully strong breath, for with it he turned all the arrows aside. “The scamp is in here,” said one of the party. “Let’s get at him another way.” So, getting their flints and shovels, they began to dig.

“That’s your game, is it?” mumbled Ta-Vwots. “I know a way out of this that you don’t know.” With a few puffs of his breath and a few kicks of his legs he reached a great fissure that led into the rock behind him, and along this passage he scrambled until he came to the edge of it in a niche, from which he could watch his enemies digging. When they had made the hole quite large he shouted, “Be buried in the grave you have dug for yourselves!” And, hurling down a magic ball that he carried, he caved the earth in on their heads. Then he paced off, remarking, “To fight is as good fun as to eat. Vengeance is my work. Everyone I meet will be an enemy. No one shall escape my wrath.” And he sounded his war-whoop.

The next day he saw two men heating rocks and chipping arrow-heads from them. “Let me help you, for hot rocks will not hurt me,” he said.

“You would have us to believe you are a spirit, eh?” they questioned, with a jeer.

“No ghost,” he answered, “but a better man than you. Hold me on those rocks, and, if I do not burn, you must let me do the same to you.”

The men complied, and heating the stones to redness in the fire they placed him against them but failed to see that by his magic breath he kept a current of air flowing between him and the hot surface. Rising unhurt, he demanded that they also should submit to the torture, and, like true Indians, they did so. When their flesh had been burned half through and they were dead, he sounded his war-whoop and went on.

On the day following he met two women picking berries, and told them to blow the leaves and thorns into his eyes. They did so, as they supposed, but with his magic breath, he kept the stuff away from his face.

“You are a ghost!” the women exclaimed.

“No ghost,” said he. “Just a common person. Leaves and thorns can do no harm. See, now.” And he puffed thorns into their faces and made them blind. “Aha! You are caught with your own chaff I am on my way to kill the Sun. This is good practice.” And he slew them, sounded his war-whoop, and went on.

The morning after this affair some women appeared on Hurricane Cliff and the wind brought their words to his ears. They were planning to kill him by rolling rocks upon him as he passed. As he drew near he pretended to eat something with such enjoyment that they asked him what it was. He called out, “It is sweet. Come to the edge and I will throw it up to you.” With that he tossed something so nearly within their reach that in bending forward to catch it they crowded too near the brink, lost their balance, fell over, and were killed. “You are victims of your own greed. One should never be so anxious as to kill one’s self.” This was his only comment, and, sounding the war-whoop, he went on. 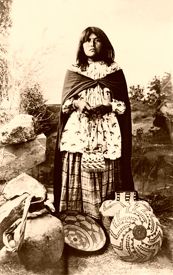 A day later he came upon two women making water jugs of willow baskets lined with pitch, and he heard one whisper to the other, “Here comes that bad Ta-Vwots. How shall we destroy him?”

“What were you saying?” asked the hare god.

“We just said, ‘Here comes our grandson.'” (A common form of endearment.)

“Is that all? Then let me get into one of these water jugs while you braid the neck.”

He jumped in and lay quite still as they wove the neck, and they laughed to think that it was braided so small that he could never escape, when — puff! the jug was shattered and there was Ta-Vwots. They did not know anything about his magic breath. They wondered how he got out.

“Easily enough,” replied the hare god. “These things may hold water, but they can’t hold men and women. Try it, and see if they can.”

With their consent, Ta-Vwots began weaving the osiers about them, and in a little while, he had them caged. “Now, come out,” he said. But, try as they might, not a withe could they break. “Ha, ha! You are wise women, aren’t you? Bottled in your own jugs! I am on my way to kill the Sun. In time I shall learn how.” Then, sounding his war-whoop, he struck them dead with his magic ball and went on.

He met the Bear next day and found him digging a hole to hide in, for he had heard of the hare god and was afraid. “Don’t be frightened, friend Bear,” said the rogue. “I’m not the sort of fellow to hide from. How could a little chap like me hurt so many people?” And he helped the Bear to dig his den, but when it was finished he hid behind a rock, and as the Bear thrust his head near him he launched his magic ball at his face and made an end of him. “I was afraid of this warrior,” said Ta-Vwots, “but he is dead, now, in his den.” And sounding his war-whoop he went on.

It was on the day following that he met the Tarantula, a clever rascal, who had a club that would deal a fatal blow to others but would not hurt himself. He began to groan as Ta-Vwots drew near, and cried that he had a pain caused by an evil spirit in his head. Wouldn’t Ta-Vwots thump it out? Indeed, he would. He grasped the club and gave him the soundest kind of a thwacking, but when the Tarantula shouted “Harder,” he guessed that it was an enchanted weapon, and changing it for his magic ball he finished the Tarantula at a blow. “That is a stroke of your own seeking,” he remarked. “I am on my way to kill the Sun. Now I know that I can do it.” And sounding his war-whoop he went on.

Next day he came to the edge of the world and looked off into space, where thousands of careless people had fallen, and there he passed the night under a tree. At dawn, he stood on the brink of the earth and the instant that the Sun appeared he flung the magic ball full in his face. The surface of the Sun was broken into a thousand pieces that spattered over the earth and kindled a mighty conflagration. Ta-Vwots crept under the tree that had sheltered him, but that was of no avail against the increasing heat. He tried to run away, but the fire burned off his toes, then his feet, then his legs, then his body, so that he ran on his hands, and when his hands were burned off he walked on the stumps of his arms. At last, his head alone remained, and that rolled over hill and valley until it struck a rock, when the eyes burst and the tears that gushed forth spread over the land, putting out the flames. The Sun was conquered, and at his trial before the other gods was reprimanded for his mischievous pranks and condemned thereafter to travel across the sky every day by the same trail.

About the Author: Charles M. Skinner (1852-1907) authored the complete nine-volume set of Myths and Legends of Our Own Land in 1896. This tale is excerpted from these excellent works, but is not verbatim, as some editing has occurred.