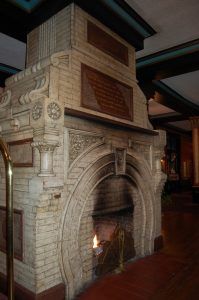 Fireplace at the Crescent Hotel

Today, the Crescent Hotel is one of the most visited hotels in the South. With its long and extensive history, it is also known to be one of the most haunted places in the Ozarks. Staff and guests alike tell stories of a number of ghosts that are still said to inhabit the old hotel.

The most often sighted apparition is that of an red-haired Irish stonemason, who the staff has dubbed “Michael.”  Allegedly, Michael was one of the original masons who worked on the building of the hotel in 1885. However, while working on the roof he lost his balance and fell to the second floor area and was killed. This area now houses Room 218 of the hotel and is said to be the most haunted guestroom. Michael is evidently a mischievous spirit who likes to play tricks with the lights, the doors, and television, as well as often being heard pounding loudly on the walls. Others have witnessed hands coming out of the bathroom mirror and heard cries of what sounded like a man falling in the ceiling. Yet other guests have been shaken during the night, and on one occasion a patron ran screaming from the room, professing to have seen blood splattered all over its walls.

From the days when the old hotel served as Baker’s Cancer Hospital, the lingering spirit of a nurse, dressed all in white, is often seen pushing a gurney on the third floor.  Only spotted after 11:00 p.m., the time which they used to move the deceased out the cancer hospital, the ghostly spirit vanishes when she reaches the end of the hallway. Others who have not seen the apparition have reported the sounds of squeaks and rattles that sound like a gurney rolling down the hallway. During the 1930s, this area was used as the morgue and even today still houses “Dr.” Baker’s old autopsy table and walk-in freezer. Also located on the third floor is the laundry area, where a hotel maintenance man once witnessed all of the washers and dryers inexplicably turning on by themselves in the middle of the night.

The apparition of the greedy “Doctor Baker” himself, has also been seen in the old Recreation Room in the basement and at the foot of the first-floor stairway. Dressed in a purple shirt and white linen suit, and looking somewhat confused, the apparition appears identical to old photographs of the infamous “quack.”

For a time, the antique switchboard continued to be utilized in the hotel, but when it continually received phone calls from the otherwise empty basement, the use of the old switchboard was discontinued. It was here in the basement that “Dr.” Baker’s hapless patients were often convinced of his miracle cures and handed over their life’s savings for the “treatment.”

Another remnant of these old “hospital” days is a ghostly figure who calls herself “Theodora.” Most often seen by housekeepers in Room 419, Theodora courteously introduces herself as a cancer patient, before quickly vanishing.

In the lobby, a gentleman dressed in formal Victorian clothing, complete with top hat, has often been spotted at the bottom of the stairway and sitting at the bar. Described as distinguished-looking with a mustache and beard, many have claimed to entice him into conversation. However, he just sits quietly and never responds, before he suddenly disappears. 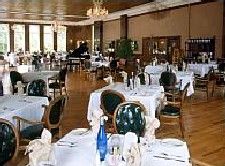 The hotel’s Crystal Dining Room, is another place in the hotel that is said to contain frequent paranormal activities. Here, other Victorian dressed apparitions have often been encountered.   Many have seen groups of 1890’s dancers, in full-dress attire, whirling around the room in the wee hours of the morning. Other reports tell of a 19th-century gentleman who has been seen sitting at a table near the windows. When approached, he says, “I saw the most beautiful woman here last night and I am waiting for her to return.”

A former waitress reported that she spied the vision of a Victorian bride and groom in the dining room’s huge mirror. The groom allegedly made eye contact with her before the couple faded away.

The Victorian spirits that linger in the dining room are said to be very playful, and on one occasion during the Christmas season, the Christmas tree and all its packages were found mysteriously moved to the other side of the room. Additionally, all the chairs had been moved to circle or face the transported tree. On another occasion, staff arrived in the morning to find the dining room in perfect order, with the exception of all of the menus scattered about the room.

In the dining room’s kitchen. the apparition of a small boy has been seen skipping around and sometimes pots and pans are said to come flying of their hooks of their own accord.

One other often reported spirit is that of a young female who once attended the Crescent College and Conservatory for Young Women, which was open between 1908 and 1924. According to the tale, the young girl either jumped from or was pushed from a balcony to her death. Today, guests report hearing her screams as she falls.

Other apparitions have been sighted in Room 202 and Room 424, as well as a ghostly waiter carrying a tray of butter in the hallways.

Whether you visit the historic Crescent Hotel to get a peek at one of its many spirits, or simply want to experience its long history and luxurious accommodations, you will certainly not be disappointed.

Today, the fully restored hotel creates an ambiance that has transcended time, while providing all the amenities that the modern-day traveler requires. Surrounded by 15 acres of formal gardens and nature trails, the hotel offers 72 guest rooms, many with their own balcony, and 12 luxury suites throughout the building. The New Moon Spa features a full menu of treatments, a salon, and a wellness program. 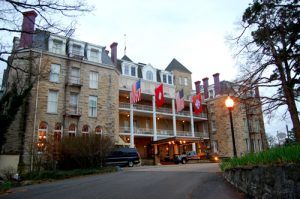 Eureka Springs is located in just eight miles south of the Missouri border in northwest Arkansas near Beaver Lake.

Haunted Hotels and Inns Across America

4 thoughts on “The Haunted Crescent Hotel in Eureka Springs”