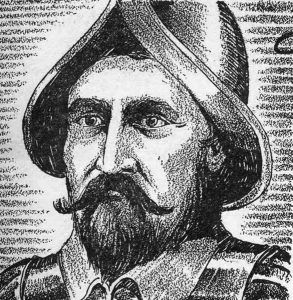 Andres Dorantes de Carranza, an early Spanish explorer, was a native of the southwestern Castilian town of Gibraleon, Spain. The son of a minor nobleman, Pablo Dorantes, he faced bleak economic prospects in Spain and sought his fortune in the New World. In 1527, he enlisted as a captain in the ill-fated expedition of Panfilo de Narvaez. Taking his Moorish slave, Estevanico, with him, the two began the voyage to Florida in 1527. After surviving a hurricane near Cuba, the expedition landed on the west coast of Florida near present-day Tampa Bay in April 1528, claiming the land for Spain. A series of hurricanes and fights with the local Indians killed many of the crew, and the ship’s captain sailed to Mexico without many of his men.

The stranded men soon built five crude barges on which they sailed west, hoping to reach a Spanish settlement in Mexico. Three of the vessels sank along the way, but the two surviving ones, carrying about 80 men, landed at Galveston Island, Texas. After a very cold winter with very little food, only 15 men survived. In the spring, the men traveled west by land, walking along the Colorado River, and through the deserts of modern New Mexico and Texas, before finally reaching civilization in Mexico in 1536. By this time, only four men had survived – Estevanico, Carranza, Cabeza de Vaca, and Alonso Castillo Maldonado. They were the first non-natives to travel in this area of southwestern North America.

Eight years after being stranded in Florida, they arrived at the Spanish settlement of Culiacan. Later that year, they reached Mexico City, where they were welcomed by the Viceroy Antonio de Mendoza. The viceroy asked Andres Dorantes to assist in a follow-up expedition, but Dorantes declined but agreed to sell his slave, Estevanico, to Mendoza. Dorantes remained in New Spain and married the widow of Francisco de Valdes, María de la Torre, who controlled the encomiendas of Asala and Jalazintgo. After Maria’s death, Dorantes married Paula Dorantes, the widow of Antonio Gomez de Corona. He fathered more than 14 children in New Spain. He died in the 1550s.