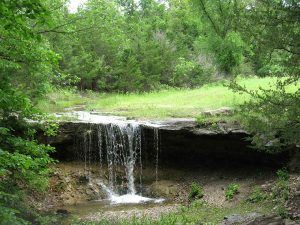 A favorite campsite near the Independence Crossing, a famous ford where pioneer wagons forded the Big Blue River, Alcove Spring originates in an unusual rock formation. It falls over a rock ledge into a pool below. Over the years, emigrants carved their names in the spring’s rocks, and many of these carvings are still visible.

This area was well-known to early-day traders, mountain men, and later travelers to the Far West. John C. Fremont and his 1842 exploring expedition camped at Alcove Spring, and Marcus Whitman led a thousand emigrants to Oregon who stopped at the Spring in 1843. Utah-bound Mormons and California-bound gold-seekers followed, including the Donner Party, most of whom later froze or starved in the Sierras. One member of the Donner Party — Sarah Keys, Margaret Reed’s mother — died here of consumption while the party was waiting for the river to fall enough to cross. She was buried somewhere in the area.

Edwin Bryant, traveling with the ill-fated Donner-Reed Party, wrote a detailed description of the spring on May 27, 1846:

“We found a large spring of water, as cold and pure as if it had just been melted from ice. It gushed from a ledge of rocks, which composes the bank of the stream and falling some ten feet, its waters are received into a basin… A shelving rock projects over this basin, from which falls a beautiful cascade of water, some ten or twelve feet. The whole is buried in a variety of shrubbery of the richest verdure… Altogether it is one of the most romantic spots I ever saw… We named this the ‘Alcove Spring’, and future travelers will find the name graven on the rocks and on the trunks of the trees surrounding it.” 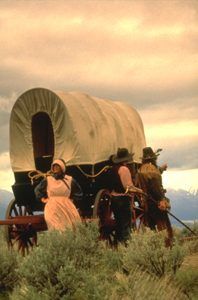 Other travelers described it as “a beautiful cascade of water” and “it was one of the most romantic spots I ever saw.”

Because Kansas was not open to settlement during the heyday of the Oregon Trail, few who traveled across this area ever lived here. Many, however, wrote of the beauty and fertility of the land. Their descriptions of the Kansas and Blue River Valleys helped dispel the “Great American Desert” myth and encouraged others later to settle in Kansas.

Listed on the National Register of Historic Places and considered one of the most significant historic sites on the Oregon Trail in Kansas, the spring is productive all year round.

Alcove Spring is located about six miles south of Marysville, Kansas, at 1834 E. River Road, Blue Rapids, Kansas. Travel there from Blue Rapids by taking US-77 north to Schroyer Road. There is a small sign on the highway just before the Georgia-Pacific gypsum mine. Follow Schroyer Road five miles north to the park. Schroyer Road is gravel and is rough in wet weather.

A 223-acre park offers a self-guided walking tour and interpretive exhibits. From Highway 77 north of Blue Rapids, go west on Tumbleweed Road and follow signs for about six miles. 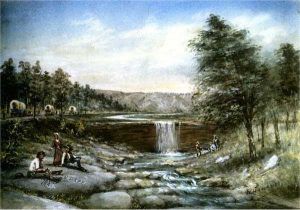 Landmarks on the Oregon Trail