By Albert Bushnell Hart in 1896 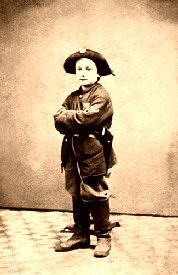 A boy soldier in the Civil War

When the Tenth Indiana was recruited in the fall of 1861, they took for their drummer a little fellow named Johnny McLaughlin, whose parents resided at Lafayette, Indiana. He was then a little over 10 years of age and beat his tattoo at the head of the regiment for several months of active service.

At Fort Donelson and Shiloh, Tennessee, when the drum-beats were drowned in the deeper roar of battle, Johnny laid down his sticks, and taking the musket and cartridge box from a dead soldier, went out to the front, and fought as bravely as the stoutest soldier in the regiment. Escaping unhurt in each of these engagements, he was enamored of soldier life and sought a transfer from the infantry to Colonel Jacob’s Kentucky Cavalry. Being favorably impressed with the spirit and zeal of the young warrior, Colonel Jacob put him into his best company and mounted him on a good horse.

At the engagement at Richmond, which soon followed, in the summer of 1862, he fought with as much coolness and skill as any of his company, handling his saber, revolver, and revolving rifle with the address of a veteran. 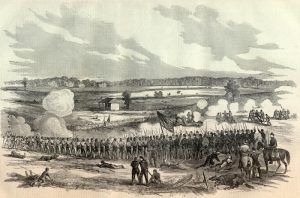 The following October, he was in another battle at Perryville, Kentucky, where he received his first wound, a ball passing through the leg above the knee. In this engagement Colonel Jacob, with a part of his command, was temporarily separated from the greater part of the regiment, and while cut off, was attacked by a largely superior force of the enemy, led by a Major Colonel Jacob was deliberating for a moment on the demand to surrender, when the little hero drew his pistol and shot the Major in the mouth, killing him instantly. A few moments of confusion and delay followed in the rebel regiment, during which Colonel Jacob and his men escaped.

A few weeks later, he was engaged in a skirmish with some of John Morgan’s men, who were raiding through Kentucky, and the fighting was severe. Johnny was set upon by a strapping fellow, who gave him a pretty severe cut on the leg with his saber and knocked him off his horse. A moment after, another rebel seized him by the collar and exclaimed: “We’ve got one little Yankee, anyhow.” However, the little Yankee did not see it in that light and quickly drew his pistol, shot his captor dead, and a moment later, the rebels were routed, he escaped capture.

As he was going back to Indiana on furlough to give his wound time to heal, he was stopped at one point by a provost guard, and his pass was demanded.

“0,” said he, “the Colonel didn’t give me one, but just told me to go along with the rest. But,” added the little soldier, showing his wound, “here’s a pass the rebs gave me; isn’t that good enough for a little fellow like me?” The guard thought it was. 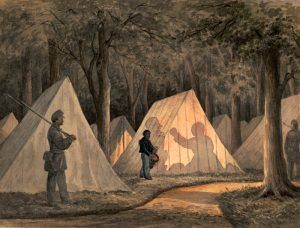 Civil War drummer in Union Camp during the Civil War.

His wound proved quite serious, and, much to his surprise, and against his wishes, he received his discharge in consequence of this and his extreme youthfulness. Not relishing civil life as long as the hostilities lasted, he applied at a recruiting office, but the condition of his leg excluded him.

Nothing daunted, however, he sought and obtained an interview with the President, who, on bearing the story of the boyish veteran, gave a special order for his enlistment. He had now made up his mind to follow the life of a soldier, and joined the regular army of the United States as a bugler in the cavalry service, and made as fine-looking, neat, and obedient a little dragoon as there is in the army.

About the Author: Albert Bushnell Hart was a Harvard graduate, American historian, college instructor, and author. He edited the Harvard Graduates’ Magazine for eight years and wrote several books, including The Romance of the Civil War, published in 1896. A Boy Soldier was included in that work, which is now in the public domain. His article, as it appears here, is not verbatim, as it as been edited.