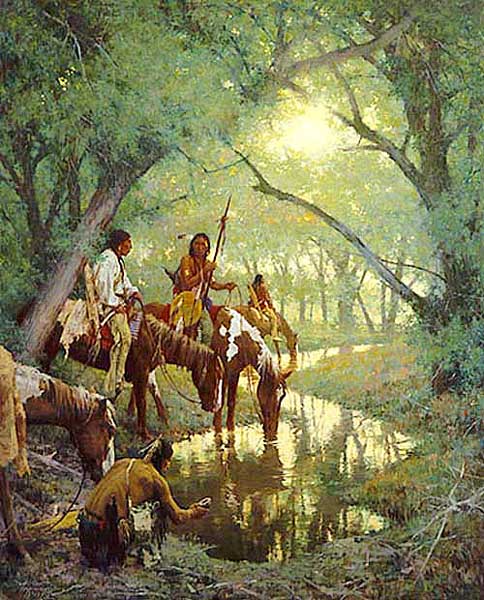 “In the 19th century in what is now western Kansas, there was an area called the White Woman Basin. In the early days, there was a creek, which meandered into the basin and at some point disappeared into the round. This creek is still on the map. The basin had many pools and springs and was an important source of water for the Southern Cheyenne, who ranged over Kansas and the surrounding country. Small parties of Cheyenne warriors would often stop with their horses for a welcome drink.”  — Howard Terpning, Artist and Storyteller

Winding through Greeley, Wichita, and Scott Counties in western Kansas, White Woman Creek starts in Colorado and disappears into White Woman Basin. It flows underground from there into the Arkansas River. The abundant underground water was one of the features that made the area so attractive to early settlers.

There are several versions of how the creek got its name. The first tells of a Cheyenne Indian attack in the late 1860s. The Cheyenne were said to have attacked a western settlement in retaliation for an earlier raid on their camp by white men. After several white men were killed, the Indians recaptured their stolen goods and kidnapped 12 white settlers — 10 men and two women.  As time passed, the two white women decided to stay with the tribe and married Cheyenne men. One of the women, who the Indians called Anna-Wee, fell in love with Chief Tee-Wah-Nee, and bore him a son. Most of the white men also were accepted and remained with the Cheyenne. However, there was one man who was eager to leave.

After many months with the tribe, he was able to steal a horse and made his way to Fort Wallace in present-day Wallace County. Upon his arrival, he convinced the army that the remaining whites were being held against their will. The escaped man led a group of soldiers to the Indian camp and the soldiers attacked, killing the Chief and his infant son. As the battle continued, his wife, Anna-Wee retaliated by killing the man who had betrayed them. She then continued to defend the tribal village she had come to think of as home, and in the end, she too was slain.

Another story tells of an Indian war party that was raiding homesteads in the area in the 1870s. During the raid, they also attacked an Army ambulance, killed the guard and kidnapped a woman who was traveling with the ambulance. The warriors rode off with the woman and one night while camping along a creek, she was able to escape. One version of the tale says that in order to avoid the same tortures she had seen inflicted upon the ambulance driver, she stole a rope from the Indians while they camped, ran to a tree on the banks of the creek, and hanged herself before her captors could stop her. Another version says that the last that the Indians saw of her, she was running up the bed of the stream, and it is believed she perished on the prairies. 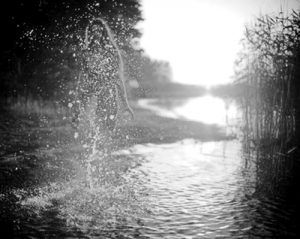 Ghostly woman along a creek.

Since the late 1800s, legend has it that on moonlight nights, the specter of woman has often been seen running along what is now a dry creek bed, or at other times, wandering slowly along the old stream. Others have heard her singing a mournful Indian song.

Compiled and edited by Kathy Weiser/Legends of Kansas, updated October 2019.