William Alexander Anderson “Bigfoot” Wallace was one of the most colorful and toughest of Texas’ frontier characters. He was a backwoodsman, folk hero, soldier, and Texas Ranger, who took part in the Republic of Texas and the Mexican-American War.

Born in Lexington, Virginia, on April 3, 1817, to Andrew and Jane Ann Blair Wallace, William grew up working in his father’s fruit orchard until he heard that his older brother and a cousin, who had moved to Texas, had been killed in the Goliad Massacre in the spring of 1836. He then set out for Texas himself to “take pay out of the Mexicans.”

Wallace first settled near LaGrange, Texas, in 1837, where he tried his hand at farming and quickly joined up with the Texas Rangers under Captain John Coffee Hays. In 1840, he moved to Austin, where he helped to lay out the new town. While there, he was misidentified as an Indian named “Bigfoot,” who had ransacked a settler’s home. Though Wallace was soon cleared, the name “Bigfoot” stuck – an appropriate nickname for the six feet two inches tall, 240-pound muscled man.

In 1840, Wallace participated in the Battle of Plum Creek and, in the Spring of 1842, fought against Mexican General Adrian Woll’s invasion of Texas.

Later that year, he volunteered for the Somervell Raid across the Rio Grande and, afterward, joined a splinter group that was later called the Mier Expedition to penetrate Mexico further. However, the group was surrounded and captured by a force ten times their size. Forced into central Mexico, the men could escape but were quickly recaptured and forced to participate in what became known as the “Black Bean Incident.” This was a “lottery,” in which black and white beans were placed in a crock in a 1 to 10 ratio. Those who drew a black bean were executed, while a white bean meant prison. Wallace was one of the “lucky” ones, drawing a white bean, and soon found himself on an 800-mile forced march to the Perote Prison in Vera Cruz. After several U.S. Congressmen signed a petition, he was released and joined the Mexican-American War after returning to Texas. 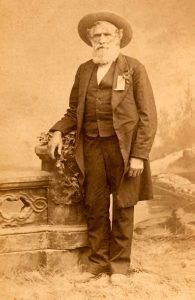 After the war, he commanded a company of Texas Rangers fighting border bandits and Indians on the frontier. When the Civil War erupted, he was still helping to guard the frontier against the Comanche Indians.

Somewhere along the line, Wallace was granted a piece of land by the State of Texas, where he ranched along the Medina River. However, in his later years, he was living in Frio County, and when a small village was formed, it was named “Bigfoot,” after Wallace, who had made a legend of himself during his lifetime.

Described as humorous, mellow, and honest, he became a teller of tales, which were extremely popular among his visitors though sometimes embellished. In 1870, some of these tales were told by biographer John Duval in a best-selling book called The Adventures of Big Foot Wallace, The Texas Ranger, which further contributed to his reputation as a Texas folk hero.

Wallace died on January 7, 1899, and shortly after that, the Texas legislature appropriated money for moving his body to the State Cemetery in Austin, Texas.