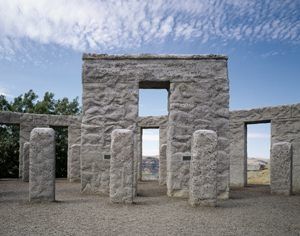 On a lonely bluff overlooking the Columbia River and the town of Maryhill, Washington, is a full-size replica Stonehenge. An almost identical copy of the more famous English Stonehenge, it was built by Sam Hill, a road builder, as a memorial to those who died in World War I. Dedicated in 1918, the memorial wasn’t completed until 1930. Hill passed away soon after he finally saw his masterpiece completed. He was buried at the base of the bluff, but there was no easy path to his resting place because he wished to be left alone.

The project began when Hill was mistakenly informed that the original Stonehenge had been used as a sacrificial site. He thus constructed his replica as a reminder that “humanity is still being sacrificed to the god of war.”

The dedication plaque on this American Stonehenge reads:

“In memory of the soldiers of Klickitat County who gave their lives in defense of their country.  This monument is erected in the hope that others inspired by the example of their valor and their heroism may share in that love of liberty and burn with that fire of patriotism which death can alone quench.”

Sam Hill’s Mansion and the American Stonehenge are now part of the Maryhill Museum of Art, which also includes monuments to the soldiers of Klickitat County who died in World War II, Korea, and Vietnam. 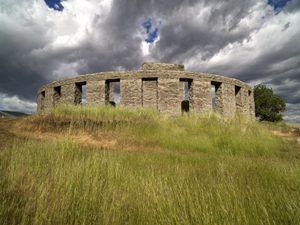 Maryhill Stonehenge, a replica of England’s Stonehenge in Maryhill, Washington. It was commissioned in the early 20th century by the wealthy entrepreneur Sam Hill and completed in 1930. It was the first monument in the United States to honor the dead of World War I -– specifically, soldiers from Klickitat County, Washington. The monument is all that is left of the town of Maryhill, named for Sam Hill’s wife, most of which was destroyed in a fire.

This concrete landmark can be seen by all who enter Klickitat County on U.S. Highway 97.

There is no admission fee to visit the memorial; however, donations to its maintenance fund are always appreciated.