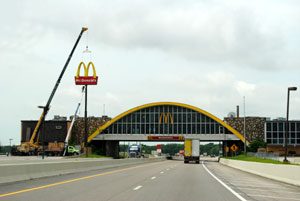 Spanning the Will Rogers Turnpike, I-44, near Vinita, Oklahoma was this 29,135 square foot McDonald’s restaurant. Seating some 300 hungry hamburger enthusiasts, it was once touted as the largest Mcdonald’s in the world.

Later another “World’s Largest McDonald’s” was acclaimed to be in Moscow, Russia. But now, the true leader is in Orlando, Florida, in a building decorated to look like a large bag of French fries.

But this McDonald’s spanning over the interstate was an interesting photo opportunity, if not  the “World’s Largest.”  With a highway exit on each side and a golden arch on the facade, visitors could take a view in a window seat to watch the nation roar by mere inches below. 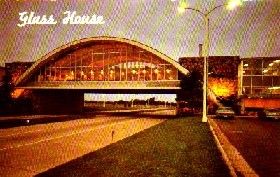 Vintage postcard of the Glass House long before it turned into McDonald’s.

However, McDonald’s didn’t build this restaurant. In the 1960s it was known as the Glass House Restaurant when Howard Johnson’s was the “flavor of the decade” rather than McDonald’s, and life was a little slower.

For years it continued to tout itself as the World’s Largest McDonald’s, and square footage-wise, it was large, the McDonald’s portion of the building was about the same size as what you would find in any shopping mall.

Today the golden arch above the highway is no longer golden, and the building serves as a highway service center. Though there is still a Mcdonald’s, it also features a Subway restaurant, a gift shop, seating areas, other retail centers, and tourist information.