Opened in 1928, the historic Ott Hotel is not only a designated Texas historical site, but it’s also allegedly haunted.

Built to accommodate the numerous passengers from the Texas & New Orleans Railroad, the Ott Hotel thrived during Liberty’s prosperous oil boom days. When large oil fields were discovered in the Liberty area in the 1920s, numerous people flooded the town that soon sported several new restaurants, hotels, and other businesses. The old hotel, built by John and Sallie Ott adjacent to the tracks, was first called the Drummer Hotel for the day’s traveling salesmen.

The hotel’s original design included 50 rooms in an L-shaped building that provided community baths in the middle of the long halls. The dining room and parlor space were later converted into additional rooms. Beckoning travelers from the train was a large painted sign on the outside of the two-story brick building. Once checked in, travelers enjoyed the prominent four-bay front porch as they watched the traffic pass by.

The Ott family continuously operated the craftsman-style hotel until 2002, when Kelly and Susan McCain purchased the building. Immediately, they began to restore the building to its 1928 appearance, complete with 10-foot ceilings, wooden floors, and many of the original furnishings. At the end of the second-story hallway are two baths – one for the men and one for the women. The front lobby continues to hold its original front counter, hotel registers, and several historical artifacts, including photographs.

The McCains’ will tell you that their hotel “ain’t fancy, but it’s affordable, clean and functional.” It’s also allegedly haunted.

Since remodeling first began, several strange incidents have occurred, including doors slamming by themselves, the sounds of phantom heavy footsteps, and loud knocking. Guests and staff alike have often heard a man and woman having a heated argument in an empty room. However, when staff opens the door to check it out, the phantom couple reverts to silence.

Several have reportedly seen spectral bodies, including reports of a woman wearing a white nightgown, a tall figure in a black hat and coat, a man dressed in blue, a well-dressed red-headed woman, and multiple dark figures that are glimpsed throughout the old hotel. One guest even reported a spectral man who stood at the end of her bed every night she stayed there.

The hotel continues to have other strange events that occur, such as lights that go on and off by themselves, doors that open and close on their own, strange smells, and floating grey mists. The hotel’s security video has captured the doors opening and closing with unseen hands, as well as the sounds of people arguing when no one is there. Sometimes, the sound of a gunshot is heard at the hotel.

Several odd incidents have been caught on guest cameras, including the figure of a well-dressed lady on one and moving orbs on a video camera. 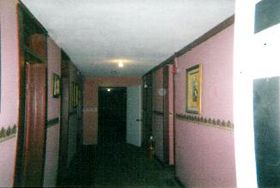 Who are these unseen ghosts? Two of these restless spirits are thought to belong to a couple by the name of Anna and Joshua. In the Fall of 1930, Anna was having an illicit affair at the Ott Hotel and her husband Joshua, having heard about it, came looking for her. Joshua, a tall, slender man, wearing a black cowboy hat, duster coat, and black boots, knocked on one door after another until he found her. When Anna opened the door, dressed in a white nightgown, the two immediately began to argue. Suddenly a shot rang out, and when the smoke cleared, both Anna and Joshua lay dead on the floor. To this day, it is unclear who shot and killed the married couple, but both died from the same bullet.

As to the other spirits that seemingly linger at this hotel, no one knows; however, one legend tells that Bonnie and Clyde once stayed at the hotel on their way to Louisiana. Might one of these old bandits still be lurking about? One can only guess.

At least one paranormal investigations group has examined the hotel, finding several anomalies. The last operating train hotel inTexas, the Ott Hotel, was designated as a Texas Historic landmark in 2006. Tours are available only by reservation.