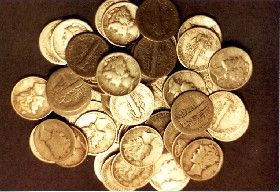 If you are like me, you never get enough of the hunt, whether on the search for rocks and gems, fossils, or treasure. Now that the cold, wet weather is putting a damper on outside searches for those in the north, it is prime time for indoor searches. After all, while you can, every once in a while, stumble upon a great place to hunt for treasure while just hoofing around in the wilderness, most productive treasure searches start inside.

The first task in treasure hunting is to figure out where exactly it is that you want to hunt. It’s best to be realistic. You may have a dream to hunt in the South Sea Islands, but if you have no means to get there you have much better ways to spend hours and hours of research. Productive searching close to home may just help you fund some of your dream searches. So to start, keep it close — somewhere you will actually be able to spend some time searching. Once you have your target area pinpointed, it’s time to hit the history books and old newspapers.

The information you are seeking is about old boom towns, mining areas, battle areas or routes, ghost towns (whether structures still stand or not), town areas leveled by natural disasters and never rebuilt, pilgrim migration routes, and anything else that can lead you to spots that were once inhabited or attacked, and are now deserted. If you are on shorelines, you might also be interested in information about pirate localities, sea battles, landing areas, old settlements, and anything else that might point you to buried artifacts along a coastline, or even in the water if you are into underwater search.

Once you pinpoint the areas that look good to search you want to find out what is on public land, and what is privately owned. The last thing anyone needs is people roaming around private land without permission.

Not only can this cause trouble for you personally, but it can hinder all who want to search, as mass trespassing can lead to complaints that in turn lead to laws limiting searching for everyone. City halls or a local branch of USGS will be able to provide you the information about public and private lands and will be likely to appreciate your efforts to be respectful about searching. Chatting with people who have been employed for long periods in these places can sometimes get you some bonus leads, too, especially in less populated areas where people are more likely to know in depth histories and legends from their areas.

When you find information of interest, you will want to dig up any old pictures you can find so you can get an idea of what was located where. Some landmarks may still exist even if the town itself doesn’t. County offices sometimes have records of town layouts that will actually give you coordinates of old buildings and other useful information. Now that you have all the hard information resources you can dig up on battle routes, massacre areas, stagecoach robberies, settler camps, towns leveled in natural disasters, and so on, it’s time to start using your imagination.

About the Author:  Sally Taylor is an avid gem and treasure hunter, explorer, writer, and is the owner of Rockhound Station 1, a global rockhound community website that provides forums, articles, a newsletter, and more.