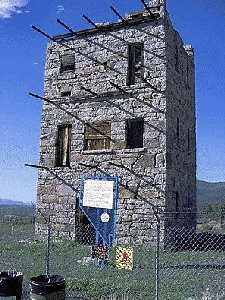 As a summer home for his sons, Anson Phelps Stokes, a mine developer, railroad magnate, and member of a prominent eastern family, began to build the Stokes Castle in Austin, Nevada in 1896. It was completed in the summer of 1897.

Patterned after a family painting of Italy, the castle was used by the Stokes family for only a short period. When they traveled west in June of 1897 with some of their friends, they spent a month at the castle. In October, they spent a few more days and returned in the summer of 1898. However, this time they sold out the mine, milling equipment, and the castle, and never returned again.

The castle is three stories high and 50 square feet around. Built of hand-hewn native granite a hand-operated windlass was used to raise the huge slabs of granite into place. The first floor contained the kitchen and dining room, the second floor was the living room, and the third floor contained two bedrooms. On the first floor, each room had a fireplace and on the upper floors, there wore wooden balconies.

Over the next half-century, the castle fell into neglect and was owned by several individuals. In the early 1950s, a promoter tried to buy the structure with the intention of moving it to the Las Vegas strip. However, Molly Magee Knudsen, a cousin to Anson Stokes purchased it in 1956. Having grown up hearing the stories about her cousin’s castle in Nevada, she could not resist.

Molly, a New York socialite, soon turned ranch owner and prominent citizen of Austin. A chain-link fence was placed around the building to help preserve it from further theft and vandalism.

Today the Stokes Castle stands as a sentinel on the north end of Reese River Valley, a reminder of the heydays of Austin’s past history.

Stokes Castle has a well-maintained road leading to it and can be viewed year-round. Located on Highway 50 on the west side of Austin, this historic building is well worth a look-see.