After riding with William Quantrill’s gang of guerillas during the Civil War, George and Oliver Shepherd joined up with the James-Younger Gang. 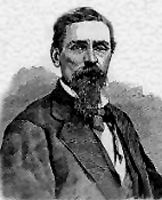 George Washington Shepherd (1842-1917) – Born in Missouri, Shepherd married Martha Sanders in March 1861. He fought with William Quantrill’s gang of guerillas during the Civil War and afterward joined up with the James-Younger Gang. He was involved with the robbery of the Southern Bank of Kentucky on March 21, 1868. The gang got away with some $14,000, but a posse was hot on their trail. Shepherd was caught and sent to prison for three years. During his incarceration, his wife remarried without first obtaining a divorce. Shepherd killed James Anderson, the brother of William “Bloody Bill” Anderson in Texas. He died on February 23, 1917.

Oliver “Oll” Shepherd (1842-1868) – Born on November 25, 1842, Shepherd married Mary Jane Vance on February 2, 1860, and the couple would have two children. He fought with the Quantrill’s Raiders during the Civil War. Afterward, he joined up with the James-Younger Gang and was with the gang when they committed the first daylight bank robbery in the nation in Liberty, Missouri, on February 13, 1866. After stealing some $57,000 and trying to make their getaway, a shooting erupted, and an innocent college student was caught in the fray and killed.

Shepherd was again present when the gang robbed the Southern Bank of Kentucky of $14,000 on March 21, 1868. Oliver’s cousin, George Shepherd, was arrested with a posse hot on their trail, but Oliver made it back to Missouri. However, he was tracked down by a posse in Jackson County, and when he resisted arrest and attempted to shoot his way to safety, he was killed on April 4, 1868. He had 20 bullets in his body.