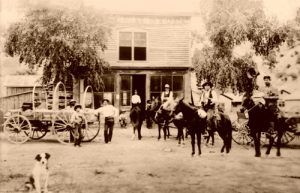 Pioche, Nevada furnished the first live market for produce that the Mormons of southern Utah ever had, and in the summer of 1872, they drove a lively trade. But, they found soon that the trade had many drawbacks, especially when the sheriff was instructed to collect a license from each one offering Utah produce for sale. They soon adopted cunning tactics of camping a few miles out of town and disposing of several wagon loads of produce through one of their number, who would endeavor to make one license serve for all. The Sheriff then grew cunning and appointed several deputies, with instructions to scour the woods and collect a town license wherever they caught a Mormon.

This worked pretty well against them but did not swell the treasury of the town any. The collectors were cunning, and instead of using the legal receipts furnished them, they issued bogus ones and pocketed all they got. An exposure followed in due time when, of course, the collectors were all let out, but the season was about over, and the Mormons escaped a double tax. The exposure came about in a most unexpected manner. Pioche was filled with reckless and waggish sports. One day a Mormon wagon, the bed of which was made into a big coop and loaded with chickens, was slowly passing along Meadow Valley Street when someone opened the rear end door. The chickens began hopping out, and before the owner knew it, they were running around the streets, squawking and dodging a yelling, hooting gang of sports, who were scattering them to the four winds of heaven. The owner started in hot pursuit after his rapidly vanishing property, aided by the sports in a manner that made it all the more difficult.

To add to the Mormon’s alarm and vexation, the sports drew their revolvers and began a lively fusillade ostensibly at the chickens. Still, the shots fell so uncomfortably near the Mormon that in alarm and with fear to speed his flight, he abandoned the chase after his chickens and sought the sheriff to invoke the aid of the law. The Sheriff coolly asked for his license, when the Mormon produced a bogus one, wrung from him in the woods, and signed with a fictitious name. The sheriff could not recognize it and promptly arrested the Mormon for trading without a license. In the meantime, the chickens hauled all the way from St. George had, as Jim Fiske said, “gone where the woodbine twineth”– up the spout, and the Mormon was compelled to remain on expense and hire a lawyer in his defense. The bogus license was evidently bought in good faith, but the Mormon couldn’t find the man that issued it. A sympathetic jury acquitted him, and then the lawyer took his team for his services. The innocent and injured Mormon had to start for home on foot, robbed and plundered by a chain of unfortunate circumstances that left him no legal redress. But, it ended the experiment of keeping a gang of license collectors scouting the woods and canyons to plunder Mormons under the guise of law.

By William Daugherty, for the Reno Evening Gazette, June 26, 1891. Compiled and edited by Kathy Weiser/Legends of America, updated January 2021.