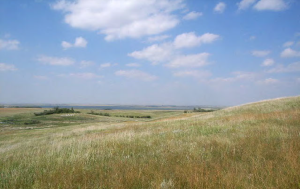 Battle of Dead Buffalo Lake (1863) – This skirmish, taking place in July 1863 in Dakota Territory was between United States Army forces and Santee, Yankton, Yanktonai and Teton Sioux. The Indians attempted to capture the pack train of the army and retired from the field when they were unsuccessful.

The Battle of Stony Lake (1863) – This was the third and last engagement of Henry Hastings Sibley’s 1863 campaign against the Santee, Yankton, Yanktonai and Teton Sioux in Dakota Territory. Following the battle, the Indians fought delaying actions against Sibley until their women and children had successfully crossed the Missouri River. Sibley then gave up his chase of them.

Battle of Whitestone Hill (1863) – This was the culmination of the 1863 operations against the Sioux Indians in Dakota Territory. Brigadier General Alfred Sully attacked a village on September 3–5, 1863. The Indians in the village included Yanktonai, Santee, and Teton (Lakota) Sioux. Sully killed, wounded, or captured 300 to 400 Sioux, including women and children, at a cost of about 60 casualties. Sully would continue the conflict with another campaign in 1864 – Sully’s Expedition Against the Sioux in Dakota Territory. 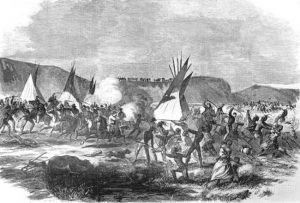 Killdeer Mountain (1864) – The Battle of Killdeer Mountain, fought on July 28, 1864, in western North Dakota, was an outgrowth of the 1862 Sioux discontent in Minnesota. Leading more than 3,000 volunteers, Brigadier General Alfred Sully confronted more than 1,600 Sioux in the North Dakota badlands, representing one of the largest pitched battles in the history of Plains warfare. Sully’s force approached the Indian encampment dismounted in a large square. The soldiers easily deflected the Sioux charges and drove the warriors from the field. Although casualties were few, Sully was able to destroy vast quantities of Indian stores. Killdeer Mountain Battlefield is operated by the North Dakota State Parks.

Battle of the Badlands – This skirmish was fought in Dakota Territory, in what is now western North Dakota, between the United States Army led by General Alfred Sully and the Lakota, Yanktonai, and the Dakota Indian tribes. The battle was fought August 7–9, 1864 between what are now Medora and Sentinel Butte, North Dakota. It was an extension of the conflict begun in the Dakota War of 1862. Sully successfully marched through the badlands encountering only moderate resistance from the Sioux.