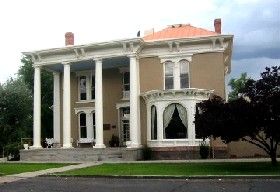 The Luna-Otero Mansion in Los Lunas, New Mexico was known for its great steaks, hot chili, and great deserts; but that’s not all it’s known for. Evidently, it’s also renowned for its resident ghosts.

In 1692 Domingo de Luna was granted land by the King of Spain in what would later become Los Lunas, New Mexico. A few years later, Don Pedro Otero arrived under similar circumstances. Over the years, the two families added to their fortunes through livestock and additional land acquisitions. Both families became extremely powerful and were involved in politics. The marriages of Solomon Luna to Adelaida Otero, and Manuel A. Otero to Eloisa Luna in the late 1800s united these two families into what became known as the Luna-Otero Dynasty.

When the Santa Fe Railroad wanted a right-of-way through the Luna property in 1880, the proposed railroad tracks were planned directly through the Luna hacienda. In order to gain their right-of-way, the railroad agreed to build a new home for Antonio Jose Luna and his family according to their specifications. Before long, a southern colonial-style mansion, built with adobe materials of the southwest was completed for the family. However, Antonio Jose died in 1881, the same year that the house was completed. As a result, his oldest son, Tranquilino and his family were the first to live in the luxurious home. When Tranquilino died in 1892, his younger brother Solomon took the reins of the empire and moved into the spacious mansion. 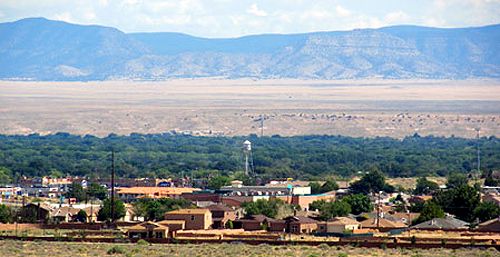 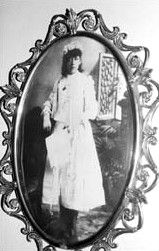 Josephita Otero as a young girl

In the early 1900s control passed to Soloman’s nephew, Eduardo Otero, because Soloman had not children. In the 1920s multiple improvements to the mansion were made, including the addition of a solarium, a front portico, and ironwork that surrounded the entire property. It was Eduardo’s wife, Josefita, more familiarly known as “Pepe,” that was largely responsible for these many efforts. The daughter of William R. Manderfield, founder of the Santa Fe New Mexican, Josefita lovingly spent her days caring for her magnificent gardens and improving her fine home.

Over the years the mansion changed hands several times before it was purchased and renovated as a fine dining establishment in the 1970s. It was then that the ghost of Josefita began to appear. Perhaps she didn’t like the renovations or maybe she just wants to stick around to make sure they were doing a good job on the home that she had spent so many years looking after.

Dressed in 1920s period clothing, she has been described by employees as appearing very real. Most often she is seen in two former bedrooms on the second floor, an attic storeroom, and at the top of the stairs leading to the second-floor bar.

At the top of the stairs sits an old rocking chair which she has often been seen sitting in and rocking slowly. On one occasion when an employee approached the ghostly apparition, she simply stood up then slowly vanished. More often she is seen walking up and down the stairs, a habit that has been so commonplace that employees barely notice anymore.

Where there’s one spirit, others seem to follow and more ghostly apparitions have been seen at the mansion. One of these is was a former servant named Cruz, who was thought to have been a groundskeeper. Most often seen on the main level, he is said to be particularly friendly to women and children and likes to play practical jokes on the employees and patrons. On one occasion he was seen sitting on a sofa as if waiting to be served. Dressed in vintage attire, the man was relaxing patiently when a waitress asked another staff member why he hadn’t been served. However, the response was “What man?” and when the waitress looked back to the sofa, the vintage spirit faded away.

The Luna-Otero Mansion, on the National Register of historic places, is located at 110 W. Main in Los Lunas, New Mexico just west of the junction of Highway 314 and Highway 6. The fine-dining establishment fell victim to the 2020 COVID pandemic mandated shutdowns and decided to close its doors for good in June of 2020. It’s unknown as of this update what’s next for this historic mansion.