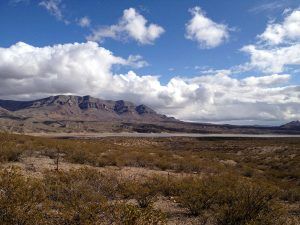 Caballo Mountains – Also called Horse Mountains, the peaks are located 35 miles north of Las Cruces, New Mexico. Gold bars, silver, and jewels were reportedly buried by a spring under the big rocks of Cabello Canyon. The buried cache was said to have been stolen from the Chihauhua-Spanish by the Indians during the Indian uprisings.  Having no need for the treasure, the Indians carted the goods by horses and mules to the hiding spot after their murderous raids.

Capitan Mountains – A huge store of Aztec Indian treasure in gold bars and rich ore, said to total some $25 million, is located in the Capitan Mountains, possibly in a cave or cavern.

Cimarron – While traveling along the Santa Fe Trail to Independence, Missouri a group of freighters were attacked just three days into their trip.  The freighters were carrying 25 bags of gold coins worth about $150,000. Seeing the imminent attack the men buried the gold somewhere between Ute Park and Cimarron, New Mexico in Colfax County. Only one of the men escaped the attack to tell the story but severely wounded, he died just a few days later. The dying man said that the cache was buried in an area with three large rocks, one of which was “half as large as a house.”

Colfax County – Point of Rocks – In 1851 two pioneers were said to have buried $40,000 in gold coins near a campsite on the old Santa Fe Trail and near the Point of Rocks. The Point of Rocks in Colfax County is on private land, about eight miles north and two miles east of a roadside park on US Highway 56. This landmark was a popular campsite with a nearby spring. There was considerable violence at this site, including the killing of the White Family in 1849. There are graves sites at the point that the money was supposedly buried.

Columbia – A cave, said to filled with a pile of gold Spanish coins literally knee-deep, lies on a steep east canyon wall from a ravine on the exact Mexico-New Mexico border west of Columbia.  Known to an Apache Indian, who removed several hundred coins in the 1950s, the exact location was lost when he was killed in an auto accident.

Cooney, Grant County – Long ago a stagecoach was robbed outside of Cooney, in Grant County. The stolen loot was said to have been hidden near Cooney, but it has never been found.

Grants – Over $100,000 taken from several train robberies is believed to be hidden near the Lava Beds southeast of Grants in Valencia County.

Mount Dora – Devoy’s Peak near Mount Dora was a favorite hideout for outlaws in the late 1800’s. Much of their hidden loot is said to be hidden in the area.

Taos County – Gold bars have been missing for many decades at Tres Piedras in the San Juan Mountains, Taos County.

Tijeras Canyon – There are several treasure historians who believe that the huge Gran Quivera hoard, 1,600 burro loads of gold and silver, is located in the southern Manzano Mountains and possibly in the Hell’s Canyon of the Four Hills area, both near Tijeras Canyon on Highway I-40.