May, Oklahoma is a semi-ghost town in Harper County. Image courtesy Google Maps. 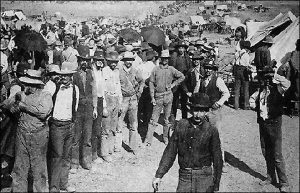 Preparing for the Cherokee Outlet Opening in 1893.

May, Oklahoma is a semi-ghost town in southern Harper County, that got its start after the Cherokee Outlet Opening of 1893.

One of the first settlers was Illinois native John H. Porterfield who established a store on the present townsite and named the settlement in honor of his daughter, Jessie May. When a post office opened in July 1896, Porterfield became the postmaster.

The town was platted in July 1902 and became a wheat-shipping point after the Wichita Falls and Northwestern Railway, a Missouri, Kansas, and Texas Railway subsidiary, completed its construction through town in spring 1912. 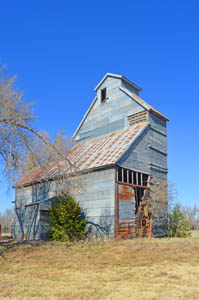 Old Silo in May, Oklahoma by Kathy Weiser-Alexander.

The town was incorporated on November 3, 1913. At that time, it boasted the May State Bank, the Cottage and Keystone hotels, the C. B. Cozart Grain Company, a grain elevator, a feed barn, and the May Restaurant and City Meat Market. That year, a two-story, brick school building was built. Early newspapers were the May Monitor, the May Bugle, and the May Record. In 1920, its population peaked at 324 and afterward gradually declined. In 1930, the population was 258, and in 1940 it was 239.

Cattle and wheat remained economically important to the community during these years. However, located just south of the North Canadian River and east of Otter Creek, the town was often subject to flooding.

During World War II, May really declined as residents joined the military or sought employment elsewhere. The exodus continued into the postwar years, causing businesses to close. By 1950, it was called home to only 143 people, and its high school closed in 1957.

By 1970, the town’s population had dropped to just 91 in 1970, and the May School District was divided between Laverne, Fort Supply, and Gage. Two years later, the Missouri, Kansas, and Texas Railway was abandoned.

Today, May is called home to about 40 people. It still has a post office, a church, a grain elevator, and a smattering of homes. 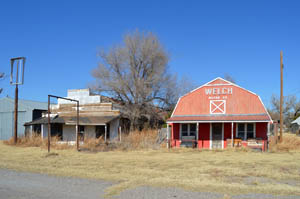 Old business buildings in May, Oklahoma by Kathy Weiser-Alexander.

It is situated at the intersection of State Highway 46 and U.S. Highway 270, 21 miles southwest of Buffalo, the Harper County seat.