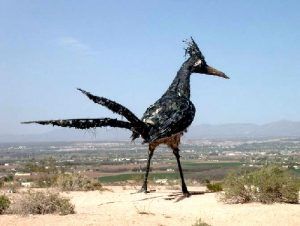 Boasting 350 days of sunshine per year and a history that dates back some 4,000 years, Las Cruces, New Mexico has become a popular southwestern destination, offering a number of events and attractions.

That being said, one of its most distinctive attractions is a giant roadrunner, crafted entirely of trash, that beckons a warm welcome to visitors at a rest stop on I-10 about ten miles west of Las Cruces. This whimsical statue, made entirely from junk retrieved from the city dump, was built in 1992 by artist Olin S. Calk.

Standing atop a hill overlooking I-10, the roadrunner, representing New Mexico’s state bird, can’t be missed as she stares endlessly across the fertile Mesilla Valley at the majestic Organ Mountains across the way.  This giant bird, approximately 20 feet tall and 42 feet long, was actually built at the city dump, until it closed several years ago.  The city fathers, wondering what to do with the larger than life sculpture, made an excellent decision when they decided to move it to the roadside stop in 2000.

This large bird, touted as the world’s largest roadrunner, has a belly created with old shoes, with other parts of its body sporting everything from office fans, to computer parts, to children’s toys.

The rest stop and big bird are on the south side of Interstate 10, about ten miles west of Las Cruces between mile markers 134-135.

Las Cruces is located in the Mesilla Valley in south-central New Mexico and is the second largest city in the state (yes, larger than Santa Fe).