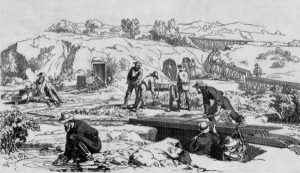 As early as 1848, gold was found in the Mosquito Valley of El Dorado County, California. As more and more people found their way to the Gold Rush country, hundreds of mining camps sprung up all over the region. One that flourished was Newtown, some nine miles southeast of Placerville.

Established in 1852, Newtown was first settled by Swiss immigrants who spoke Italian and called the village “Sunny Italy.” Growing quickly, Newtown boasted a post office, several retail establishments, and about 5,000 residents, with some claiming it was bigger than Placerville. Rich with placer gold, the Wells Fargo Express began serving Newton three times a week, and passenger stage routes were added later.

Tales abounded of the easy gold to be found. On one occasion, two large nuggets, one weighing 36 ounces and the other 42, were plucked from the South Fork of Webber Creek, one mile downstream from Newtown in Pleasant Valley.

Into this midst of easy findings and quick fortunes came a young immigrant from Finland who went by the name of “Sailor Jack.” Though the naïve man knew absolutely nothing of gold mining, he was determined to make his fortune in the goldfields. No sooner had he come to town when several experienced miners, as a practical joke, convinced the newcomer to file a claim on a piece of land they knew to be worthless. But as fate will have it sometimes, the joke ended up being on the pranksters when Sailor Jack struck pay dirt on his claim, and the mine became one of the richest in El Dorado County. Called the Sailor Jack Mine, it was also known as the Pinchgut Mine, the One Spot Mine, and the Pinchemtight Mine. In its early days, the placer mine, located about 1 ½ miles north of Newtown, yielded about $40,000 worth of gold.

During these frenzied days of working the Sailor Jack Mine, one of the miners employed there found yet another rich discovery. In a location above the Sailor Jack, in an area called Goose Neck Ravine, the miner found several large gold nuggets. Upon returning, he shared his discovery with several other miners who thought that the nuggets might have come from the lead source of the Sailor Jack. Unfortunately, though the prospector and several others returned to the area time after time, they could never find the spot where the nuggets were picked up. From that time on, the site has been referred to as the Lost Goose Egg Mine.

Today, there is nothing left of Newtown except an old stone building and a cemetery near the intersection of Newtown Road and Fort Jim Road, about eight miles southeast of Placerville. The Sailor Jack Mine was located about 1 ½ miles due north of Newtown near today’s Webber Reservoir.