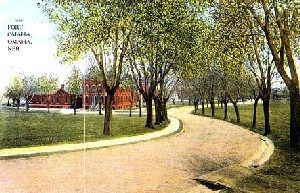 The Post of Omaha, Nebraska came into being in 1863 to train Civil War Volunteers. Three years later it became headquarters of the Department of the Platte. In 1868, a new post was activated four miles northwest of the city. Known as Sherman Barracks the first year and then as Omaha Barracks, in 1878 it was re-designated as Fort Omaha.

From 1875 to 1882 and from 1886 to 1888, as commander of the Department of the Platte, Brigadier General George Crook was stationed at the post when he was not in the field. He directed many major campaigns on the northern Plains, serving in which were numerous troops that had passed through Fort Omaha.

The Fort Omaha garrison moved in 1896 to Fort Crook, which had been activated 5 years earlier about 10 miles south of Omaha as the New Post of Fort Omaha. The first soldiers had arrived there in 1895.

In 1905 the Army reactivated Fort Omaha, and during World War I used it for a balloon school. The Navy had jurisdiction over the base beginning in 1947. The property was obtained through a quitclaim deed from the Federal Government by Metropolitan Community College in 1975, although facilities for military reserve forces are still there at the perimeter of the fort. 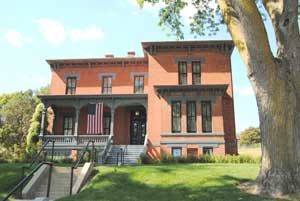 Seven buildings from the 1870s and 1880s have survived. One of the oldest is the commanding officer’s house, or Crook House, completed in 1879. Its first tenant was General Crook, and it is the only building on-site that you can still tour. A large two-story brick structure, asymmetrical in plan, Italianate in style, and crowned by hipped roofs, it is in good condition. A long one-story porch projects from its eastern facade. The interior has been altered over the years, but the exterior has changed little. The fort is located in northern Omaha at 30th and Fort Streets.