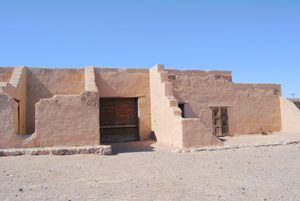 Fort Leaton, Texas, also called Old Fortin and El Fortín, was built on a bluff overlooking the Rio Grande along the Chihuahua Trail. Prior to the establishment of Fort Leaton, an old Spanish residence had been built at the same location in 1773.

In 1848, a farmer named Ben Leaton bought the property and established Fort Leaton as his home, trading post, and private fort. The private citadel was built of adobe bricks in an L-shape with the long side running parallel to the river. A large barn was also built that included large doors which allowed teams and wagons to drive inside.

Due to its remote location, the private fort was not only utilized by civilians but during the building of Fort Davis, the Army made Fort Leaton its unofficial headquarters. When Fort Davis was completed, some 80 miles to the north, the troops still utilized Fort Leaton as an outpost for military patrols.

Though the area was fraught with Indians, there was never an attack made on the civilian post. One reason for this was that Leaton was suspected of trading guns to the Indians. However, before any charges could be brought against him, he died in 1851. Afterward, his widow, facing large debts lost the farm to a man named John Burgess, who held the mortgage. Burgess then lived there until Leaton’s son Bill killed him in 1875. 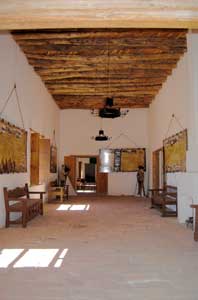 The fort then stood abandoned and began to deteriorate. In the 1930s, portions of the fort were restored by the Works Progress Administration. Today, the land and buildings have become the Fort Leaton State Historic Site. It is located on Farm Road 170, five miles southeast of Presidio, Texas.