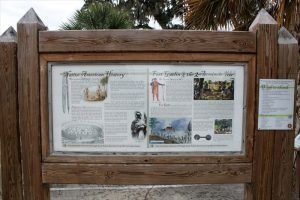 Fort Gatlin, Florida was established by the U.S. Army in November 1838 during the Second Seminole War in Mosquito County. It was built by Lieutenant Colonel Alexander C.W. Fanning and four companies of the 4th U.S. Artillery as one of a string of forts built across central Florida. The fort was named for Army Assistant Surgeon John S. Gatlin, who was killed in the Dade Massacre in 1835. The site of the fort was chosen due to it strategic position on a hill overlooking three lakes and because the area was frequented by Indians led by Seminole Chief King Philip and his son Coacoochee. Fort Gatlin reportedly was a crude stockade of “long posts firmly entrenched in the ground” with cross bars and heavy gates. The courtyard held a storehouse, mobile cannons, and a powder magazine.

Fanning completed the fort by November 15th and departed, leaving one company of troops behind to garrison the new fort under the command of 1st Lieutenant F.E. Hunt. The fort was reportedly was attacked several times by the Seminole who were attempting to regain their strategic position. The fort was deactivated on July 1839 but was re-garrisoned briefly in October 1849 during an uprising of Seminole in Southern Florida.

A few soldiers and families remained in the area, growing citrus and raising cattle and the town of Fort Gatlin was formed. In 1856, the town became the county seat of Orange County, which was created from Mosquito County in 1845. The community s name was later changed to Orlando, for militiaman Orlando Reeves, who was killed battle during the Second Seminole War.

In 1941, during World War II, the United States Navy established the Underwater Sound Reference Laboratory near this site on Lake Gem Mary because of the great depth of the lake. The lab was closed in 1997.

Near this site stood the Council Oak, the traditional meeting place of chiefs during the Second Seminole War (1835-1842). The Council Oak later was struck by lightning and died around 1900. A marker was placed at the site of the legendary tree just north of Gatlin Avenue on Fern Creek Avenue in 1970.

A historic marker indicates the site on Gatlin Avenue near Summerlin Avenue in Orlando, Florida.