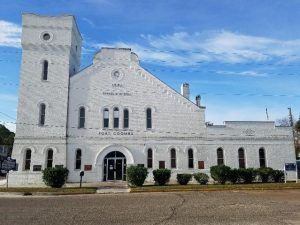 The Fort Coombs Armory in Apalachicola, Florida was built by Franklin County at the urging of the local militia company, the Franklin Guards, in 1898. The first building in the city, the two-story building, with a four-story clock tower, was made of simulated brick. It was built at the corner of 4th Street and Avenue D. It was named for James Percy Coombs who was the commander of the local National Guard unit in the early 1900s. He later served as the Mayor of Apalachicola and as a Lieutenant Colonel in World War I.

On May 25, 1900, a fire destroyed the armory as well as much of the downtown. On July 3, 1900, a committee was formed to build a new armory. It was completed at the same location in 1901 at a cost of $12,000. The replacement armory features real brick walls and a gable roof with a gable parapet. The solid massing of the walls, slit windows, and a four-story corner tower makes it resemble a medieval watchtower. The imposing military structure is one of the most unique examples of “fortress architecture” in Florida. 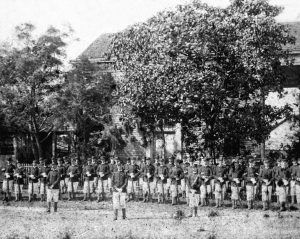 The new building included a large drill hall that could accommodate the entire company. It also included a vault to store the weapons, dressing rooms, and offices. Franklin County sold the building to the State of Florida in 1911 and a 30 by 100 feet single-story addition was made to the northwest side of the building. This addition contains a kitchen, offices, restrooms, and a company room.

The armory has served the military of Apalachicola for more than a century, with units stationed here for service in World Wars I and II, the Gulf War and the War with Iraq. Bronze plaques located on the exterior front wall memorialize the names of generations of Apalachicola and Franklin County citizens who have served their State and Nation.

Today, the armory is a contributing building on the National Register of Historic Places forming part of the Apalachicola Historic District.

The Fort Coombs Armory is located on 4th Street in Apalachicola, Florida.