Fort Christmas was established on December 25, 1837, as one of a chain of about 200 forts built across Florida during the Second Seminole War.

On Christmas day, 1837, Brigadier General Abraham Eustis led a large force of over 2000 troops, 1000 horses and 70 wagons to a point close to the St. John’s River and built the fort in a week. It was made of palmetto logs, measured 80-foot square, and was palisaded with two blockhouses, one on the southwest corner and one on the northeast corner. The fort was garrisoned with two companies of troops when completed. The fort was abandoned shortly after the Second Seminole War came to an end in 1842.

There are no remains of the original site, but a replica fort has been built about a mile south of its location. It is located in the Fort Christmas County Park, at 1300 North Fort Christmas Road (County Road 420) in Christmas, Florida 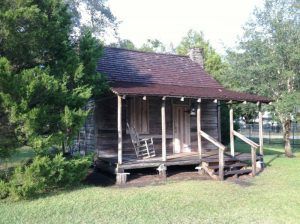 The full-size replica of Fort Christmas features seven restored historical homes that were relocated to the property from their original locations. These historic houses preserve the “Cracker” architecture of East Orange County that shows pioneer life from the 1870s through the 1930s. It also displays a 1906 Union Christmas School and its lunchroom, a sugar cane mill, two cow camps, and historical farming equipment. A museum exhibits a video presentation on the Seminole Indian Wars and pioneer artifacts dating from the Seminole War period, including weapons, clothing, tools, household appliances, and other items.

The replica fort was built by Orange County Parks and Recreation, in cooperation with the Fort Christmas Historical Society and was opened in 1977.