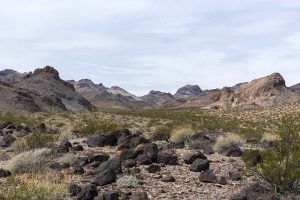 In 1894, Tom Scofield, a railroad worker, was surveying near the Clipper Mountains northwest of Essex, California when he decided to do a little exploring. When he was about three miles up the side of the mountain, he ran across an old abandoned stone house that appeared to have been built years previously.  Continuing along, he hiked approximately nine more miles when he came upon a spring. There, he followed a trail that led over the hill where he came upon a rock atop the peak that he described as being as big as a house. The large boulder was split in two and the trail continued straight through it. Beyond the passageway, he stumbled into what appeared to be an old Spanish camp.

Tom found himself standing on a high shelf, surrounded by high walls. Through other openings in the rock walls, he could see that the “shelf” was sitting high above the ground at about 500 feet. The only way in or out of the little flat was through the split rock. Scattered about the long-deserted camp, Scofield found rusty mining tools, pots, pans, fragments of a bedroll, and an old iron Dutch oven.

Also on the shelf was a mine shaft, in which he found the skeletons of seven burrows. Next to the shaft was a mine dump that contained numerous stones still containing rich gold quartz. By the time he had finished exploring the campsite, he realized that it was too late to return to his base camp. Cold and hungry, he bedded down on the shelf planning to leave at daybreak. In the morning, as he was leaving, he tripped over the Dutch oven and out tumbled a mound of pure gold nuggets. Shocked, Tom gathered as many nuggets as he could carry and returned to his base camp. From there, he caught a train to Los Angeles, where he spent the next two months in a drunken frenzy, gambling and living the high life. After squandering all the money he had received from the sale of the gold nuggets, Scofield found himself sober and completely broke. It would be two years before he was able to make his way back to the Clipper Mountains to search for the “Dutch Oven Mine.”  Try as he might, it seemed to him that everything had changed and he was completely unable to retrace his steps. Disillusioned, he finally gave up the search. 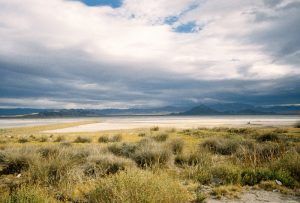 When Scofield was 84, he was interviewed by Walter H. Miller and George Haight in 1936. Living in an abandoned store in the Mojave Desert outside Danby, California, Scofield was at first hesitant to tell his story. After having been hounded for four decades by treasure hunters wanting more information about the mine, he had long tired of the story even though he continued to insist that it was true.

Today, the Dutch Oven Mine continues to be lost, or at least no one has ever claimed to have found it. The Clipper Mountains are located in the Mojave Desert of southeastern California. The range is found just south of Interstate 40 and the Clipper Valley, between the freeway and National Old Trails Highway, northwest of the small community of Essex. The range is home to at least three springs, as well as the Tom Reed Mine.