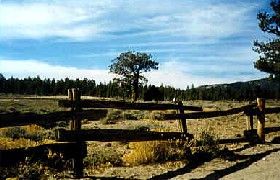 A short drive north of Big Bear Lake is Holcomb Valley and what little remains of the historic ghost town of Belleville. During the 1860s, Holcomb Valley was the richest gold mining area of southern California, supporting some 10,000 residents. Belleville, the largest town in Holcomb Valley, almost overtook San Bernardino as the county seat.

On a fourth of July celebration, Mrs. Jed Van Dusen made a flag out of her petticoats. To honor her for her patriotism, the town was named after her daughter Belle, the first child born in the camp.

1860 was also an election year, and the population of Holcomb Valley was growing so fast that the voters soon outnumbered the rest of the county. One of the matters that needed to be decided was where the San Bernardino county seat would be. The city of San Bernardino barely won the contest by only two votes. 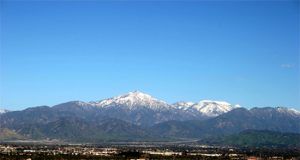 In the beginning, the route to Holcomb Valley was a difficult trek through the Santa Ana Canyon. In June 1861, Jed Van Dusen, a blacksmith, built a wagon road down the backside through Hesperia and the Cajon Pass at the cost of $1,500. Making it easier to access the camp, the settlement grew quickly and soon supported a store, two butcher shops, two laundries, a bakery, three carpenter shops, two blacksmiths, a stamp mill, and a sawmill. Of course, there were also the ever-present saloons and a place called the Octagon House where “painted ladies” danced and “entertained” men in small, dimly lit cubicles.

Belleville brought travelers into the camp by a regular stage, which took two days to reach San Bernardino. With the influx of miners also came the ever-present violence of Old West mining camps. By 1862, there had been 50 murders in Holcomb Valley. Soon, a large tree was designated as the hanging tree from which many men found their deaths at the end of a rope.

As more and more prospectors came to the area to hunt for gold and silver ore, the Bear Valley Mining District was founded.  Initial mining was for placer gold and was primarily done by small groups or individuals with claims along the stream beds. Soon afterward, quartz mining began, and the significant mines were the Mammoth, Olio, Pine Tree, and the Metzgar. This hard rock mining required stamp mills to crush the rock, and several mills were built at different sites. 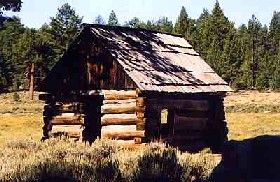 Though the Holcomb Valley gold rush was the largest in Southern California, it only lasted about a year. While limited mining continues, even to this day, the Mother Load vein has never been found.

Today Belleville is a hiker’s paradise with very little to show of its former glory days. There are a couple of old graves, some mining shafts, a simple cabin, and a few pieces of mining equipment lying about the area.

Currently, there are still more than 2,000 claims being worked by hobbyist prospectors.